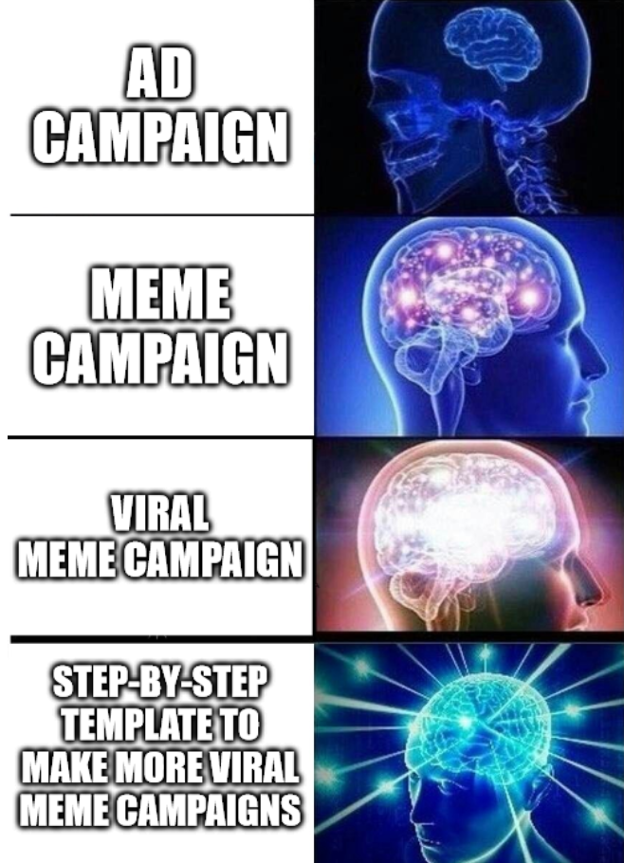 What is a marketing meme? A marketing meme is any idea that people spontaneously pass along to promote a company, product, or brand. This could take the form of an ad slogan, funny commercial, catchy jingle, viral campaign, or traditional meme-style graphic.

First: memes are not what you think.

The original meaning of “meme” was any idea that copied itself from brain to brain. That includes methods to make fire, styles of architecture, languages, songs, catchphrases, recipes, and even baby names. Like genes, some memes are short-lived (think fads or fashions), while some endure for centuries (think the Pledge of Allegiance or the Lord’s Prayer).

The current meaning of “meme” is much narrower: it’s any funny photo or video that goes viral. Take these common examples (courtesy Memes.com): Translation: “I am chronically distracted and unable to finish projects to completion. Anyone feel me?” Translation: I am proud of my accomplishment, however small. Anyone feel me? Translation: I will maintain composure even when I have no idea what to do. Anyone feel me?

The “meme generation” (let’s say anyone younger than Millennials) collect these memes on their phones and share them on social media sites like Reddit. Memes age quickly, so these examples would be considered ancient: like slang, you’ve really got to keep up.

What Makes a Great Meme

No joke: the U.S. military is studying memes. It understands the power of memes to change minds and influence behavior, especially among young people. It calls this new area of research “memetic warfare,” which sounds something dreamed up by Monty Python:

In 2011, military researcher Dr. Robert Finkelstein conducted an exhaustive study on memes on behalf of the U.S. government. In his excellent 150-page slide deck, he defines four criteria that make good memes:

The quality of a meme is its ability to propagate,
and how long those copies persist,
to influence behavior.

Marketers, of course, have been doing this for decades. What is marketing but meme-making? Every TV commercial, every magazine ad, every product slogan is meant to be a meme. By design, advertising is information that propagates, persists, and has impact: it gets us to buy the product.

In fact, “branding” – that elusive goal that everyone wants but no one can quite define – is nothing more than a huge collection of memes. Think of a brand like Coca-Cola: all the images, slogans, packages, commercials, and vending machines you’ve seen over the years have implanted Coca-Cola like a massive virus in your brain. That’s a brand.

In her terrific book The Meme Machine, author Susan Blackmore calls these huge clusters of memes a “memeplex.” Here’s a meme from Elon Musk, who is kind of a memeplex himself: Elon Musk, one of the greatest meme-makers of our time, often combines topics with passionate followings, thus doubling the viral power. (Here he combines Lord of the Rings and crypto geeks.)

If you study the variants of these memes, you’ll see they share the same format (replication) but they communicate slightly different things (innovation). For most marketers, this balance is the trickiest bit to get right. But when you get it right, get ready for your campaign to go viral.

Memes are a “Virus of the Mind”

Richard Brodie’s book about memes is literally called Virus of the Mind. Despite the book’s title, he argues that we can engineer good memes to move our lives in a positive direction (think affirmations and positive thought loops). Whether they’re helpful or harmful, good memes are contagious.

Here’s a weird idea: your thoughts are not always your own! You “catch” thoughts; you are “infected” with them. You even talk about a “catchy” song or “catchphrase,” just as you talk about “catching” a cold.

The way a virus works is by hijacking the “machinery” of your cells to make its own copies. It literally moves into your body’s cells and takes over the factory, then starts churning out infected copies of itself. Memes – whether they’re harmful or helpful — do the same thing: they move into your brain, and from there they spread through your words, Facebook shares, and tweets.

You don’t immediately know whether the programming you get from a meme is harmful or helpful. You don’t know whether it’s a protective virus, or Covid-19. The meme could inspire you to end racism, or to overthrow the government.

That’s why meme creation is literally like a superpower: we’re either engineering superviruses that will take over the world, or vaccines that will make humanity super-resistant. If you’re going to mess around with marketing memes, make the decision to use your superpowers for good.

Like the dinosaurs in Jurassic Park, well-engineered memes take on a life independent of their creators. A good meme will obey the laws of evolution, seeking to create new and better copies of itself, evolving over time. You quickly lose control of them.

While most meme researchers believe that memes (like viruses) are not living creatures, there’s another school of thought that says memes may actually be living structures, or even metaphysical entities (in which case they “want” us to create them well)!

Whether they’re living entities that infect our brains, or simply mental viruses, how do we engineer these wildly contagious memes? Read on. Like genes, memes pack a lot of information into a simple shorthand. I urge you to develop the skill of deconstructing memes: to explain in plain English what the meme is communicating. I do this with my kids all the time, and it drives them crazy. (“DAD, you’re ruining it!”)

Take for example this popular meme (at the time of this writing): Translation: “I am kind of a jerk for saying this, but you must admit it’s true.” Translation: “The contrast between colorful custom PCs and lack of fashion sense is amusingly represented by these two young women.” Translation: “Instead of the family-friendly Pokemon GO, it is funny to imagine a Counter-Strike mashup called Pokemon Global Offensive, here amusingly referenced by the Drake ‘hot or not’ meme.”

For marketers, it is important to stay current on memes, because we are now seeing memes move markets: I need only point you to the GameStop frenzy, part of the new trend of “meme stocks.” Translation: “GameStop stock is currently going through the roof, making the sound of a money-printing machine. To prove how much money we have made, we are buying this billboard in Times Square.”

To stay current on memes, I urge you to bookmark Reddit’s r/memes, though r/popular is also popular. (For brand new meme formats, check out r/MemeEconomy, where users place bets on which memes will go viral.)

The problem is that meme culture moves quickly: few memes endure. So how do we make memes that propagate and persist?

Once again: anything that’s copied from brain to brain is a meme. As marketers, you have wide creative latitude, including:

Here is the formula for how these memes spread.

1) First, memes need a way to get in. For example:

2) Next, memes need a way to copy themselves with fidelity. For example:

3) Next, memes need a way to spread themselves to other minds. Here are a few common tricks:

Let’s bring these to life with a real-world example meme.

How a Meme Spreads and Evolves The Change My Mind meme was based on a real-life photo: Canadian conservative podcaster Steven Crowder set up a table at Texas Christian University with this sign. Internet mockery followed. (Courtesy KnowYourMeme) As the meme mutated, it evolved into a format for any ironic or amusing observation. (Courtesy De1eted via Imgflip) Like viruses, memes will further mutate by mashing up visual elements and even co-opting other memes. (Courtesy Montresor_SP via Imgflip) Memes take on a life of their own, so as they spread, the original creator is usually forgotten. (Found on DNAIndia; author unknown) No Photoshop skills are needed for effective memes; in fact, the rougher the better. (Found on Pinterest; author unknown.) As humans become familiar with a meme format, the meme mutates further, here ironically making the opposite statement of the original photo by featuring a female lead. (Courtesy mclelun via DeviantArt) An old meme can get new viral power by combining it with niche communities with their own passionate followings – in this case, Minecraft. (Courtesy KurosPL via DeviantArt)

In the end, Steven Crowder created an extremely successful meme with his table stunt – though perhaps not in the way he expected. (Remember: good meme creators lose control of their creations.) Does it really matter that it mutated from conservative politics to Minecraft? The idea got copied, all the same.

To me, that idea was not male privilege, but the look of satisfied smugness on Crowder’s face: an expression that might be translated I know it all, and you have to prove to me why I’m wrong.

So what might be the positive equivalent of this meme? It might be one that encourages the human virtue of Open-Mindedness. (Perhaps the table would read “Let’s Discuss” instead of “Change My Mind.”)

Again, memes always have an underlying message, even if the creator is not consciously aware of it. This is why I encourage you to develop the habit of translating memes into plain English. Think about what they’re really saying.

Memes don’t care whether their message is positive or negative. They’re like viruses: they just want to spread.

But as humans creating and sharing these memes, we are like bio-hackers that can either use our powers for evil or for good. We’re injecting ideas into people’s brains: we can make them either viruses or vaccines.

How to Use Your Meme-Making Powers for Good

Download our free Meme Campaign Template below, to make your own meme campaigns that will change the world for good.

Like a marketing campaign brief, our free downloadable is a short document outlining what you’re trying to communicate with your meme campaign, where you’ll spread the meme, and how you’ll tie it back into the great human values (which will make your message more likely to stick).

Here are the fields, with a sample campaign below.

Primary Message: A one-sentence message that is clear, actionable, and inspiring.

Message Points: 5-10 message points that can be used as “springboards” for blog posts and social media.

Hashtags: 3-5 popular hashtags that we can use to “piggyback” our message on Twitter.

Character Strength: The critical component for creating good memes, these are the 2-3 positive human values that we will call upon with this message. (List of character strengths here.)

Communication is more effective when it’s tied into the Great Human Values.

Pop Culture Tie-ins: Are there crossover franchises (The Matrix, It’s Always Sunny, Spongebob) that we can mash up?

Cognitive Dissonance: Is there any element that will make the brain “trip up” and take notice?

Authority: Is there any element of “authority” that will encourage people to copy and share with fidelity (tradition, “the Truth,” other memeplexes)?

Repetition Frequency: How often will we post this meme?

Viral spread: How will we encourage it to be copied and shared, without explicitly asking for it?

How to Use Our Meme Campaign Template

A real-life example will help. Let’s say we want to spread the idea that “bitcoin is digital gold” for our client Bitcoin Market Journal. Our Meme Playbook might look like this:

Primary Message: Bitcoin is like a digital version of gold: it’s valuable, scarce, and will hold its store of value over the long term.

Viral spread: We will write a series of articles about this meme campaign, and ask subscribers to create their own.

Putting it All Together

Using our completed Meme Campaign Template, we can now use free tools like Imgflip to create new memes: Fill out the form below to get instant access to our Meme Campaign Template for free. Happy meme-ing!