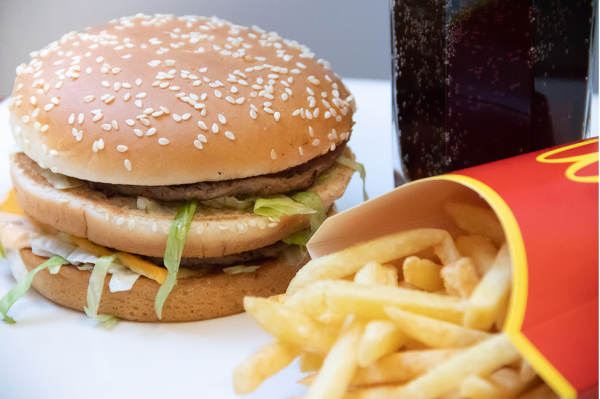 The Reddit community usually upvotes cute cat photos and funny GIFs (here’s one that will make you laugh). This week, however, the following post made it to the homepage of Reddit, where it quickly went viral (warning: language). 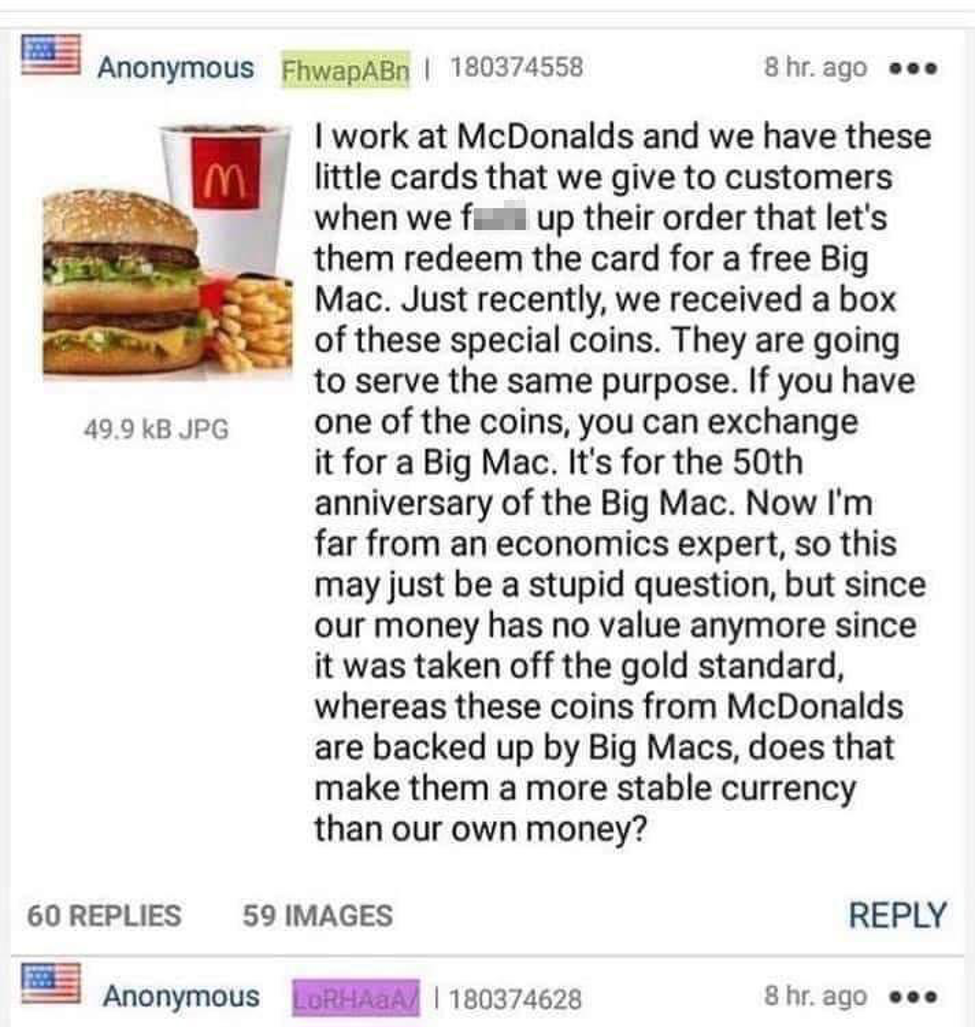 This question ignited over 1,200 responses, including a surprisingly nuanced conversation about the value of gold. This is not the kind of crowd-pleaser that usually wins Reddit gold, but it is an important data point. Why?

Suddenly, the crowds are wondering about the value of money.

Until Coronavirus, we’ve lived with the idea that we have to work hard for our money. Money was scarce and difficult to earn. In response to the Coronavirus, governments are printing money, and giving it away for free.

We all have one question: wait, what?

“You’re telling me we could have been printing money all along?” we all ask ourselves. “So why am I working so hard?” There’s a cognitive dissonance: while we all appreciate the money, something about it doesn’t feel right.

Free money seems too good to be true. There must be a catch.

So we end up with the people questioning the value of the dollar, and (half-jokingly) proposing that McMoney might be more valuable, since at least it can be redeemed for food.

This is simple human psychology: we all know there’s no such thing as a free lunch. Suddenly we’ve all received a free lunch. Who will pay for the lunch?

Which brings us to data point #2: The Coin Shortage. 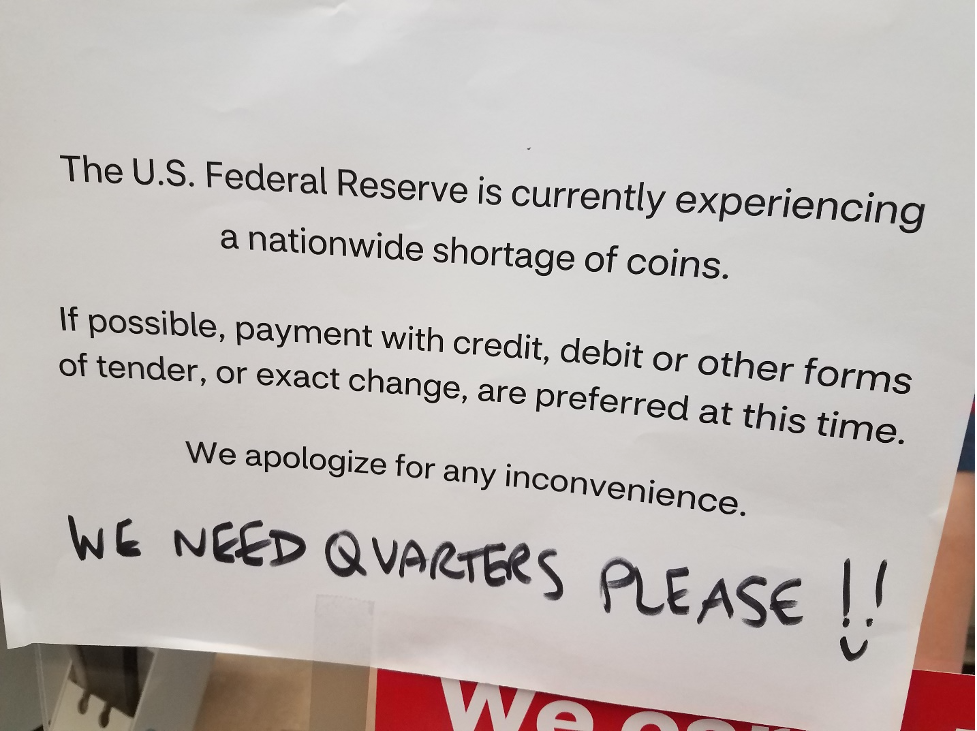 The Psychology Behind Coin Shortages

I recently snapped this photo at a pharmacy cash register, where I was buying allergy medicine (a valuable item) with my free money (printed out of thin air). I have researched why there is a coin shortage, and the usual answers blame the Coronavirus lockdown:

Human psychology says that we all have a lot of FUD about the future: Fear, Uncertainty, and Doubt. If you’re the type of consumer who still pays for things in cash, you may well be hoarding that loose change, in the same way you may be hoarding toilet paper and SPAM … just in case.

Logically, if we really think money is losing its value, we’d spend it as quickly as possible, converting it into assets with “real” value (like gold). This is, of course, already happening:

Hoarding gold and hoarding coins, for most people, are two sides of the same coin (so to speak). Economically, they’re completely different (see the Reddit discussion), but they feel kind of the same.

Human psychology is often illogical. But it matters a lot, because moods drive markets. If we all believe something has value, it has value. If we lose our faith in it (say, we suddenly get a lot of it for free, with no strings attached), then the value plummets.

This can become a vicious spiral, leading — in the most extreme cases — to hyperinflation.

The Psychology of Hyperinflation

Hyperinflation, as we’ve covered in previous columns, is where an economy experiences rapidly escalating prices, along with rapidly depreciating currency. (Here’s a list of notable examples.)

During hyperinflation, mob mentality takes over: as soon as people get their paycheck, they rush to go buy things of real value (like Big Macs and allergy medicine) because next week these things could cost twice as much. This negative spiral is both economic and psychological: it is a self-fulfilling prophecy. (Counterintuitively, coins can become scarce.)

Two things are necessary for hyperinflation:

Common sense tells us that people have not been as productive during the Coronavirus. Most professionals are working from home, while trying to manage kids and their own anxieties. People aren’t traveling or networking, so deals aren’t getting done. Meanwhile, time-wasters like Netflix and videogames are on the rise. Also, there’s free money, so why work?

Here are the numbers to back up that common sense, brought to us just moments ago by the U.S. Bureau of Labor Statistics:

If charts could talk, this one would be saying, “Ay-yi-yi!”

It takes the bureau a while to compile the data, so we’re actually looking at numbers from April-June 2020, during the peak of the Coronavirus. You have to dig through the press release to find the numbers that matter, which is that business output is down 11% from a year ago, and down 38.7% from the first quarter of 2020. (For manufacturing, which is broken out separately, the numbers are even worse.)

In plain English, this means that people are not as productive. The bureau buried it in Table A-1 at the back of the report, so I’ve taken the liberty of highlighting the most important numbers:

And here it is helpfully displayed as a graph, as it should have been by the government organization that prepared it: 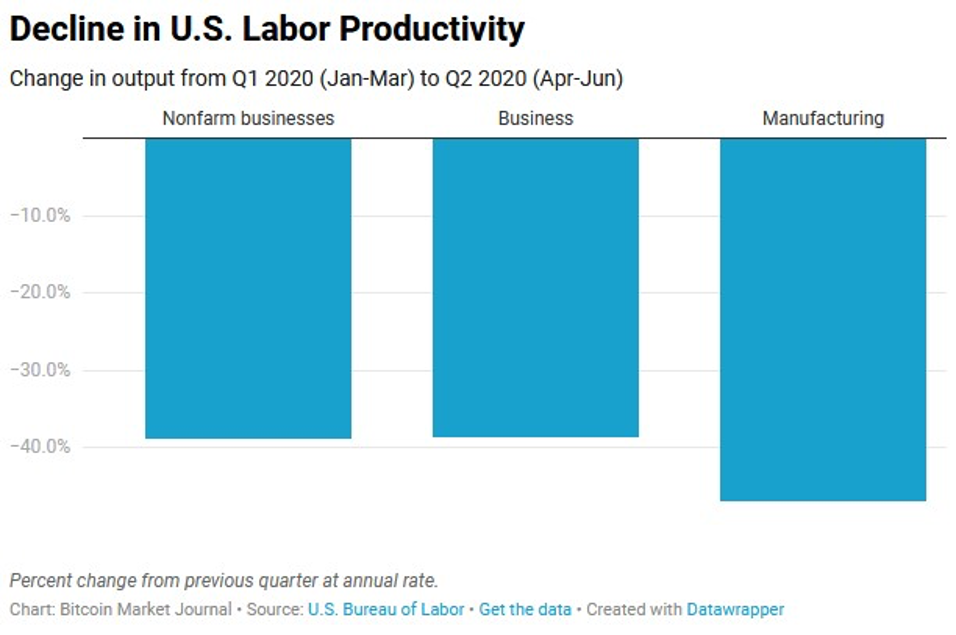 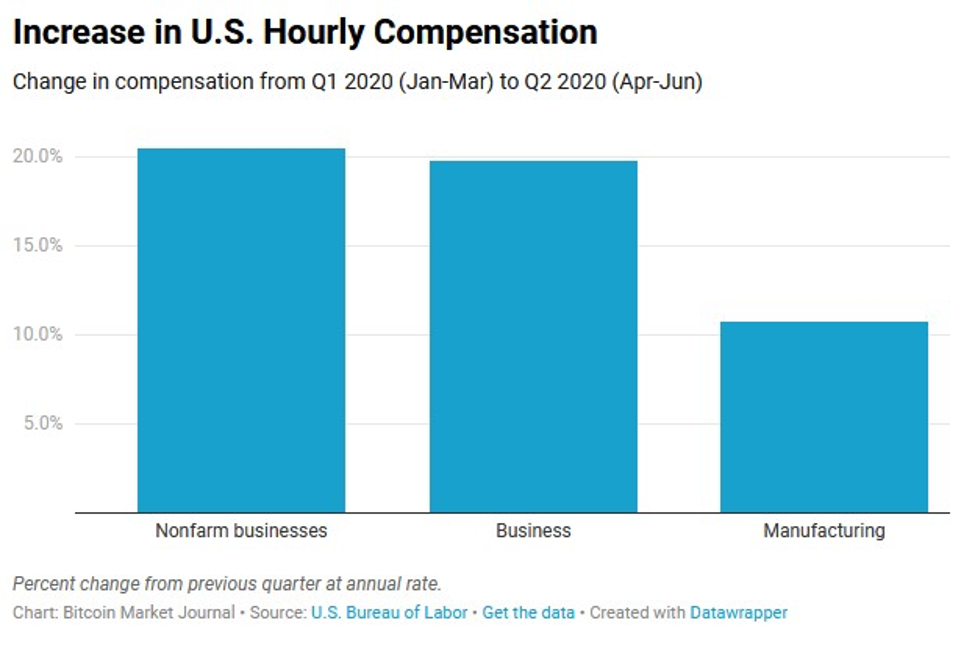 To summarize: the government is printing money, people aren’t productive, and they’re being paid more to do less. Meanwhile, people are questioning the value of money, even while they hold onto it.

Whenever we highlight a problem, we should try to offer a solution. Here’s mine.

I will tackle this from the human psychology perspective, because I believe that doesn’t get enough credit in most discussions about the economy.

The economy is, of course, a human invention: it is not a great law of the universe, like mathematics. Although economics uses math, it’s not math. Although we treat economics like a science, it’s not a science (at best, it’s a pseudoscience).

These are reverse psychology strategies. While people are holding onto coins, you’re using them to buy a diversified set of assets. When people are playing videogames and watching Netflix, you’re working hard, building your brain. While people are spending their free money, you’re investing it into bitcoin.

Most importantly, these strategies put you in control. Rather than sitting on your couch, nervously waiting for the other shoe to drop, you can be doing something that prepares you for what’s next – whatever that is.

Despite all the doom and gloom, I have a confession to make: I secretly kind of enjoy this time. It is incredibly difficult, to be sure, and I don’t wish suffering on anyone. But I see opportunity everywhere: a once-in-a-lifetime chance to rethink how we do things, to reshuffle the deck. Let’s use this time wisely.

The answer to the Reddit question, of course, is that even McMoney won’t hold its value if the underlying currency can’t be used to buy burger meat. (Burger meat, by the way, is 15% more expensive than last year.)

So what will hold its value? Your brain, for one. (Learn stuff.) Maybe real estate, maybe gold. (Diversify.) Maybe bitcoin. (Consider crypto.) Figure out where the crowds will start putting their money — but don’t follow the crowds. Lead them.

John Hargrave is the co-author of Blockchain Success Stories: Case Studies from the Leading Edge of Business.