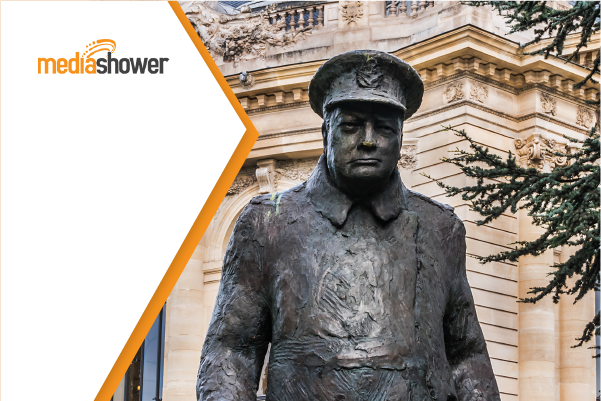 To fight the Nazis, Winston Churchill needed to be not only a great leader but also an inspiring orator. When it came to inspiring the British people during World War II, no one could match his eloquence.

With his powerful speeches, he rallied Great Britain during World War II. Discover how Churchill commanded attention with his words and what you can learn from this master communicator.

Winston Churchill was a pivotal force in Hitler’s defeat. But he would’ve never been Britain’s prime minister without his command of the English language and moving speeches. He’s one of the most famous figures in history, but few know how important his words were to winning World War II.

If your brand wants to communicate effectively, it’s worthwhile to analyze some of Churchill’s best-known speeches to understand why they’re still so powerful today. You’ll discover what made him such a master communicator, as well as how he used this skill to inspire people during times of war and peace alike.

Churchill used what’s called selective language. Selective words are powerful because they appeal to our sense of identity and belonging, like “we” or phrases that describe who we are as a nation (“our island home”).

Churchill used this type of language to rally the British people and maintain morale during World War II. For example, phrases like “we shall fight on the beaches” or “we will never surrender” helped them feel that they’re part of a group that’s struggling together in good times and bad.

Here’s how he used selective language in the most famous speech of all – his “blood, sweat and tears” address:

He also said, “The price of greatness is responsibility.” He’s describing what it means to be part of a nation that’s worth fighting for. It also appeals to the sense of personal accountability.

Churchill was selective with his language because he knew how powerful it could be in rallying the public together during tough times like the war.

You can learn from his example by thinking about how you use your own language. Do you exclude your customers with general statements? Or do you talk in terms that help readers feel included and understood?

Use Long Sentences With Few Adjectives or Adverbs

One of the reasons Churchill’s speeches have stood the test of time is that they’re so well-written. While he didn’t always speak in short phrases, and his sentences could be long as well, there were still fewer adjectives and adverbs than we typically see in political speeches today.

For example, he didn’t say, “We shall fight them in the fields,” but instead said:

That’s a long sentence with only a few adjectives or adverbs. It used active verbs, like “defend,” “fight,” and “surrender,” which makes it powerful. He also used fewer adjectives and adverbs because he wanted to keep his message clear, concise, and straightforward.

Churchill’s short phrases are also worth examining. Generally, short words and phrases can make your writing easy to read. You’ll see that many of Churchill’s most famous phrases are short yet impactful. That’s why they helped drive home key points.

Concise language can be more powerful than flowery prose when you’re trying to convince others of your point of view or call them to action.

Taking “Blood, toil, tears and sweat” as another example – it’s a memorable line from his first speech as prime minister. Here’s why it stuck:

Short words can also create an immediate connection with readers. They’re more memorable than long, complicated terms because they stand out to the reader’s eye and ear.

Churchill’s words were memorable because he used repetition. He frequently repeated key phrases and ideas, making his speeches easy to remember and helping them spread like wildfire through the press. When you repeat your main points, it helps others understand what you’re saying and create a lasting impression in their minds.

Churchill’s speeches endured for decades because of these techniques. Now, it’s time for you to give your messaging a sense of gravity, too, by applying his model.

Do you plan on using some of these techniques for your business?  We can help!