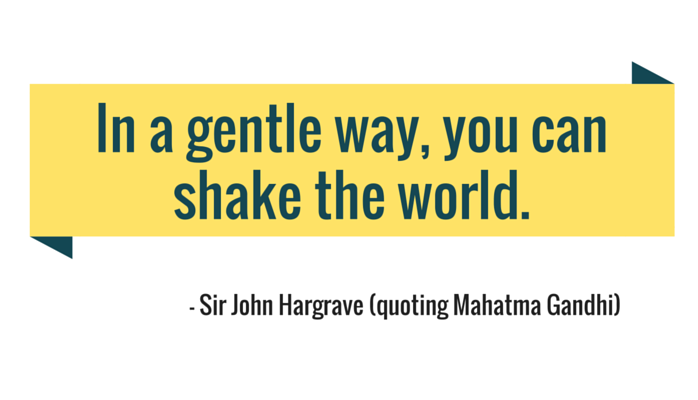 I just finished Gandhi’s autobiography, The Story of My Experiments with Truth, which I highly recommend. I enjoyed this book because it humanized Gandhi: you realize that he was just a guy. He was trained as a lawyer, he was married with kids, he had many of the self doubts and human foibles that we all share. There were a number of surprises, too: I didn’t realize that Gandhi, the father of nonviolence, helped out with several war efforts. (True story.)

But the biggest surprise was that Gandhi was a content marketer.

Gandhi was a prolific writer and publisher. He established a newspaper called Indian Opinion that shared the struggles of Indian colonists with the Indian public, such as the racism then prevalent in South Africa. Indian Opinion later became a mighty force in his campaign of nonviolent resistance: he wrote tirelessly for this newspaper, serving as its editor for several decades. (Mahatma Gandhi: media mogul.)

He later founded several other weekly and monthly newspapers including Young India and Harijan, the latter published in three different languages to spread his message to as many audiences as possible. His autobiography itself was written as a series of weekly installments for one of his publications, and you can see Gandhi figuring out the flow of his life story as he went along — there’s a charming kind of rough-draftiness to it. Here are a few lessons on how Gandhi used content marketing, that are still just as relevant today.

Gandhi produced a lot of content. Gandhi’s message was one of social, political, and personal reform. To spread this message, he wrote a ridiculous amount of content. After his death, the Indian government published The Collected Works of Mahatma Gandhi, which totaled 50,000 pages in 100 volumes. One estimate is that Gandhi wrote more than 10 million words over his lifetime, or nearly as much as Stephen King.

Whether you’re trying to win independence for your nation, or just tell the world about your company, you need a lot of content. You never know how someone’s going to find your message, and every additional piece of content you create means hundreds of potential followers. Best of all, you don’t need to invest in your own printing press and distribution channels, as Gandhi did. (Can you imagine what he would have done with a blog?)

Gandhi produced a little bit each day. There is a myth in content marketing that we need big content pieces, things that will go massively viral, so we hold off doing anything until we can do it perfectly. Then if it doesn’t go viral, we write it off as a failure.

Gandhi saw it not as a sprint, but a marathon. He was in it for the long haul, patiently and methodically writing content, even on days when he didn’t feel like it, even on days when he had nothing to say. This kind of ongoing discipline pays off: your audience becomes accustomed to the regularity of your voice, and you build influence.

You’ve got to chip away at content marketing, day in and day out. Be patient and persistent. Slow and steady wins the independence.

Gandhi produced useful content. One of the world’s most valuable assets is information. In one sense, it’s free (it costs me nothing to tell you a secret), but in another sense it’s priceless (how much will countries pay to learn their enemies’ secrets?). Gandhi’s publications were a way of spreading information: from the women’s rights movement, to the call for national unity.

Information, especially useful information, is the backbone of content marketing. It’s not just about talking up your product or service, it’s about helping out your target audience. Explain how to do something. Share a success story. Pass along a protip. And if you can do it with some kind of unique perspective, that’s even better.

You don’t have to shave your head and start hand-spinning yarn. If you humbly, patiently create content with the goal of serving your audience, they’ll thank you for it. As Gandhi might have said, be the change you wish to see on the Web.