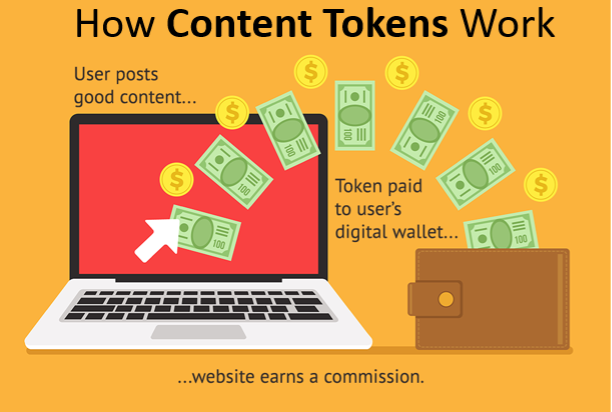 TLDR: Blockchain-based content tokens reward users for posting good stuff online, and will help us usher in a new Golden Age of Internet. These tokens are funded by sponsors, paid directly to a user’s digital wallet, and the site earns a small commission.

At the dawn of the Internet, our company Media Shower started a comedy website called ZUG. We called it “the world’s first comedy site,” and over the next 15 years it grew to millions of readers, billions of laughs, and two accidental pregnancies. (You can read the Wikipedia article here.)

After a few years of writing comedy and building an audience, we launched a message board to let our readers tell jokes to each other. I still remember the thrill of the first users posting on our forum: Comedy! Laffs! Hijinx!

The death threats would come later.

Our Internet community – which we called GAB on ZUG – was the source of great joy and mirth for over a decade. It generated hundreds of thousands of hilarious conversations, and people formed real-world friendships. Some had sex. A few got married.

The challenges of running an online community, however, were numerous and unexpected. Online communities are made up of people, and people are unpredictable. I wrote this post-mortem post on all the lessons we learned, but a simple example will suffice: the Swearbot.

We decided to hide swear words, changing them to the names of famous poets (we thought it sounded classier). My business partner Jay Stevens spent many years refining the code for what we called our “Swearbot.”

Human rules (no swearing), enforced by software (the Swearbot).

What quickly happened was that the community pushed back against the rules, finding every possible permutation of spelling to get around the Swearbot, putting spaces between the letters so our word-matching algorithm wouldn’t catch it, and finding ever-more obscure and offensive words for us to evaluate and add to the code. This went on for years.

In a sense, they were like hackers trying to find every flaw in our security software, constantly pushing at the edges, feeling for cracks in the code. Except instead of protecting a nuclear stockpile, we were just protecting the innocent minds of children.

Why was the Swearbot so important? you ask. For the same reason you don’t go to any professional website and find its front page laced with obscenity. Even comedy sites like The Onion might drop an F-bomb here or there, but it’s not all over their homepage.

User-generated content is difficult to manage, because users are humans, and humans are unpredictable. You have to set some ground rules (no swearing), and these ground rules get very nuanced and tricky to enforce (the Swearbot hackers).

Free speech sounds like a great thing, until someone posts your home phone number at 2 in the morning.

We got a lot of pushback for the Swearbot, and eventually made it optional (registered users could turn it off in the settings). Critics said we were pushing our moral values on everyone, and that swearing is funny. George Carlin would have agreed.

But building the Swearbot was absolutely the right thing to do. It helped make the community more welcoming for new users, and it emphasized that we wanted funny over foul. Plus, it was amusing to read newbies saying things like “I don’t give a Shakespeare,” or “Frost you, Emerson!”)

Today, of course, they make off-the-shelf Swearbots, but the experience of rolling our own was instructive, because it taught us about building boundaries for online behavior. And here I think blockchain can be a tremendous benefit.

Today the Internet has an enormous problem: Independent publishers need a way of creating quality user-generated content, at scale.

This problem may not seem obvious, but it is vast and pervasive. I’ll illustrate it with a few examples.

Understand that almost everyone who runs a website is an “independent publisher” (i.e., not a huge media company). Even if they’re not in the publishing business, they have a blog. Software companies, medical institutions, universities: if you have a blog, you’re a publisher.

For these publishers, the problem is that it’s really difficult to get quality user-generated content, at scale. The options range from bad to horrible:

This is a really hard problem: it’s the Swearbot x 1,000. You have to encourage free expression of ideas, while providing a way to filter out high-quality ideas from the junk – and most importantly, avoid spam. (“Comment spamming,” or hiring people to post low-quality content to your blog, is an actual industry.)

This is a real Google ad from the job site Fiverr, offering low-paid workers who will comment spam for you. (Not a joke.)

What’s needed is a simple service that can integrate with your website to allow high-quality user content, at scale. To be clear:

This is a service for independent publishers that want useful content from their website visitors, around specific niche topics. This is the vast majority of websites, and solving this problem would be like unlocking a new golden age of Internet content.

To be clear: this is us.

We also have this problem. At Bitcoin Market Journal, we would love the opportunity to have you comment directly on our columns, to have our readers share new investing ideas, to let our community crowdsource the best DeFi deals, and so forth.

We could launch a Telegram channel, but that’s not what we want. We want high-quality web pages packed with useful content, developed both by our editorial team and our community — with the community rewarded for their contributions.

Right now, it’s one-way. How do we make it two-way? The answer is blockchain. We’re working on a better model to encourage user-generated content, at scale. It has three parts.

1) Token rewards: Imagine connecting a website with your Metamask or Coinbase wallet (in the same way you connect DeFi websites today). Then you can contribute content, and earn token-based rewards based on…

2) Positive contribution: By “positive” we mean useful, interesting, or entertaining. We want to encourage high-value content aligned with the great human character strengths – not trolling, shilling, or spam. But it must also have…

3) Revenue generation: The website itself must get a commission on each “payout” of tokens to users, maybe 2 or 3 percent. This helps pay for moderators, provides a new revenue stream for publishers, and moves us slowly but surely toward an ad-free Internet. Here it is again, in case you need a visual.

There are literally thousands of additional use cases that I can’t tell you about, because the technology hasn’t been invented. These are the seeds that will allow a thousand flowers to bloom. It’s the key that unlocks a new golden age of Internet content. It’s a stairway to heaven … but the devil’s in the details.

Content Tokens: A New Golden Age for the Internet is a free downloadable guide, where we’ll walk you through all the content token experiments that have been tried, and show you the token that is likely to win. We’ll also show you how to get in on the ground floor, both as a publisher and as an investor.

Things are about to change in a big way. I Shakespeare you not.