In looking for different ways to distribute your content, you may be considering going native – that is, using native advertising as a vehicle for your content.

What Native Advertising Is

Native advertising, by simple definition, is a form of paid advertising where the ad experience follows the natural form and function of the user experience in which it is placed.

To break that down a bit, think of it this way. You are likely familiar with the concept of “going native.” This means that a person adopts the cultural traits of people around him or her, in essence blending in with the “natives.”

Similarly, the characteristic that distinguishes native advertising from other advertising forms is that it blends in naturally with its surroundings, thereby eliminating the disruptive nature that characterizes some other forms of advertising like banner ads or pop-ups.

Thus, native ads match the visual design of their surroundings and also behave consistently with the environment in which they are placed. 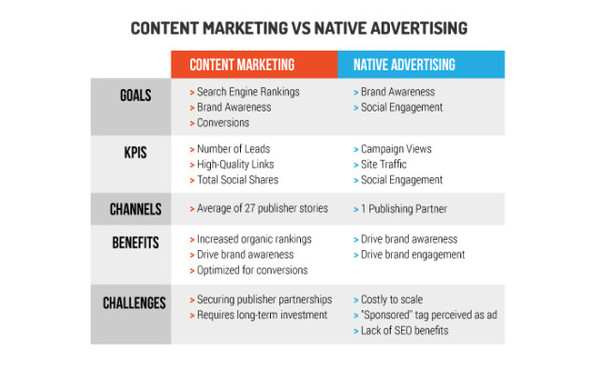 Pulizzi asserts that the confusion among some content marketers about the relationship between content marketing and native advertising arises because of the similarities they share. For instance, he notes about native advertising: “The content is useful, interesting, and highly targeted to a specific audience. In all likelihood, it’s not a traditional advertisement directly promoting the company’s product or service.”

While content marketing is usually targeted to an audience that is subscribed to receive your content, native advertising is paid advertisement that enables you to reach a targeted audience found on other sites.

Types and Forms of Native Advertising

According to IAB’s Native Advertising Playbook, common forms of native advertising include:

Below are explanations of the different types of native advertising, along with some visual examples courtesy of Venturebeat.com.

In-Feed Native Ads: In-feed native ads fall into three main groups and are generally distinguished by disclosures such as: “Advertisement”, “Promoted by”, “Sponsored by”, “Sponsored Content”, “Presented by”, “Featured Partner”, or “Suggested Post”.

In-feed ads are the most common form of native advertising, and are often seen on popular blog sites such as BuzzFeed or Gawker or on social media sites such as Facebook and LinkedIn. 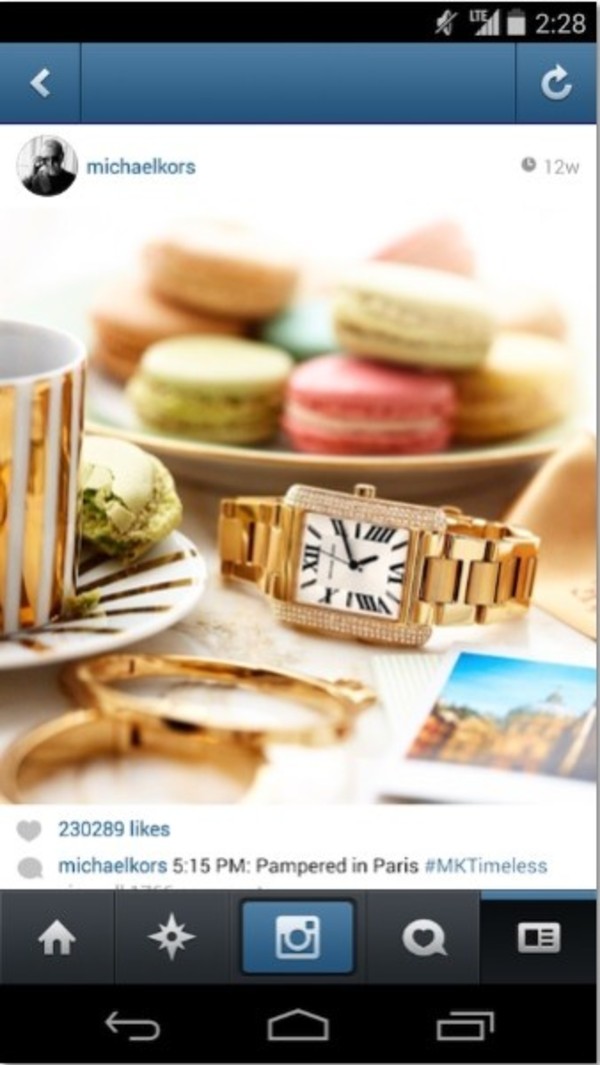 Recommendation Widgets: Just as they sound, recommendation widgets are ads delivered via an inserted widget integrated into a webpage. They are designed to appear based on the context of what a user is reading and searching. These ads do not mimic the appearance of the editorial content feed, but they do integrate with the content therein. They link to a page off the site, and must contain disclosures such as: “You might also like”, “Recommended for You”, and “Elsewhere from around the Web”.

Promoted Listings: Typically found on sites that do not contain editorial content, promoted listings integrate instead with the general browsing experience and are designed to look like products or services offered on a given site. They generally link to a specific product page. Examples include Amazon’s “What’s this?” and “Sponsored Product” links, Yelp’s “Yelp Ad” links, and Google’s “Ad” links. 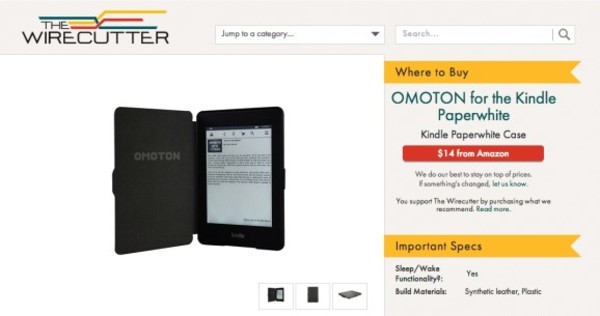 In-Ad (IAB Standard) with Native Elements: These ads fit within a standard ad banner but contain relevant information within the context of the article in which they appear. They link to an offsite page. These ads, like other IAB ads, must have clearly defined borders and must contain language which identifies them as advertisements.

Custom Units: This general catch-all category of native ads is for all the native ad types that do not fit neatly into the other category types. A defining characteristic of custom ad units is that the advertiser and the publisher work together, customizing content that will be specific to the publisher site.

How to Best Use Native Advertising in Content Marketing

Additionally, native advertising can be used to extend the lifecycle of content, breathing new life into old content through directed efforts. Native advertising also supports your retargeting strategies, thus helping you potentially move more prospects toward conversion. Just remember, good native advertising is educational, informative, entertaining, and highly relevant to its target audience. It must also comply with FTC guidelines, which we’ll address in the next section.

There are a few areas in which native advertisers can stumble badly.

Failure to comply with FTC guidelines: Perhaps the most significant pitfall to avoid when crafting a native advertisement is running afoul of the guidelines as set forth by the Federal Trade Commission concerning native advertising practices.

While it is a good idea to review the FTC’s entirepolicy statement regarding native advertising, the basic principles involved include: Native advertising content must be placed with the audience in mind. This means that both the publisher and the brand share a responsibility to always monitor their own native advertising policies and practices to avoid alienating their core audience.

Poor Content Choices: As with any other form of content marketing, native advertising’s success hinges on matching the right message with the right audience at the right time. Whether your native ads are in the form of a promoted Twitter tweet, a sponsored story on Facebook, a featured video on YouTube, or any other native advertising format, the content you provide must be relevant to reap any significant marketing benefit.

Examining the Rise and Effectiveness of Native Advertising

Given these potential pitfalls, you may be wondering if native advertising is worth your time and effort. That is a valid question, and it is one that only you can answer. However, there are significant benefits available to those who follow best native advertising practices. 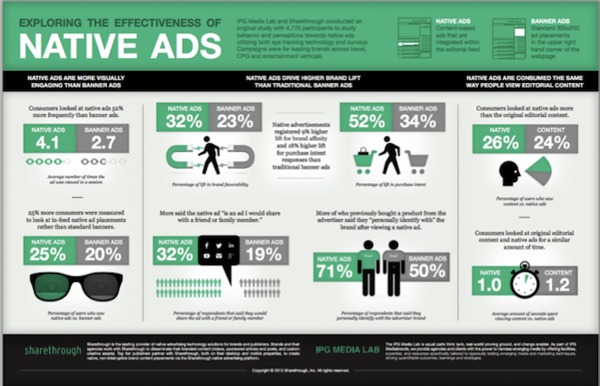 What Neuroscience Reveals about Native Advertising: There is a science behind native advertising that cannot be ignored. Sharethrough, a developer of native advertising company software, commissioned a study from Neilsen to determine how consumers visually process mobile ads.

Nielsen researchers found that native mobile ads receive twice the visual focus that banner ads do. The study notes: “Across native ads and banners, eye gaze appeared to be consistently more concentrated on the native, even though both formats were placed in-feed. Previous studies have demonstrated native’s impact on desktop, where native ads receive 52 percent more visual focus than banners.”

Another Sharethrough studyillustrates the effectiveness of native ads with these statistics:

Statistics like this partially explain why spending for native advertising is increasing so rapidly. According to Business Insider, spending on native ads is projected to top $21 billion in 2018, up from just $4.7 billion in 2013. 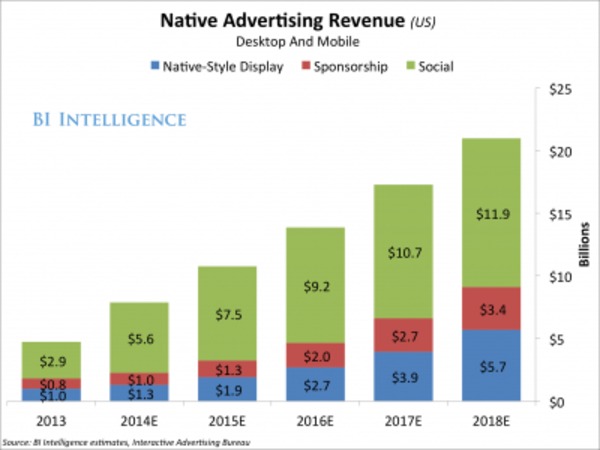 Exploring the Costs of Native Advertising

The Harvard Business Review article “Comparing the ROI of Content Marketing and Native Advertising” reports on native advertising data compiled by content marketing company Fractl and Moz. The data reveals: “On average, the cost of a native advertising campaign for top-tier news publishers was $54,014.29. (For lower-tier publishers, which we categorized as having a domain authority of less than 80, the cost drops to an average between $70 and $8,000.).”

Digiday’s 2013 article “How Top Publishers Handle ‘Sponsored Content'” also noted that costs vary greatly. For instance, campaigns can range from as little as $5,000 for a post on Business Insider to as much as $100,000 for five posts on BuzzFeed. Falling between those extremes is The Huffington Post, which charges $40,000 for an article, but promotes it on their site for four days.
The HBR article concludes:

“For some firms with large budgets, the expense is worth it if it means aligning their brand with a high-authority publisher and the right niche audience. Ultimately, native advertising has been proven effective in drawing higher click rates than traditional banner ads and other outbound marketing methods, so as a replacement for those, it could make sense.”

Content marketers looking to expand the range of their marketing message can reap significant benefits from native advertising if they follow best practices and keep an eye on ROI for their efforts.