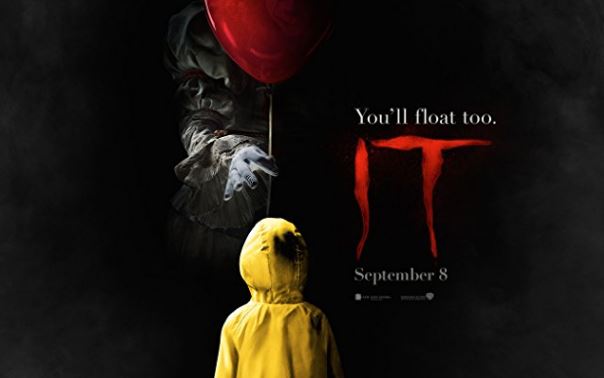 When I was a child I thought clowns were fun-inducing, child-loving characters whose greatest feats were twisting colored balloons into pets, honking gigantic red noses and donning larger-than-life shoes. They were those things. But, somehow, the “clown” has woefully morphed into… something else. At least for many people.

While it’s estimated that 12% of the population has coulrophobia (yes, a fear of clowns is real), there’s many more people who enjoy being scared by them as the box office numbers for It have proven. Created by New Line and Warner Bros. as an adaptation of Stephen King’s 1986 novel, It was released in early September and brought in a whopping $123 million in just the opening weekend alone.

Most critics say It is good, but the strange, clown-filled marketing run-up to the film’s release surely helped fuel the cash explosion.

Even though the film shattered the box office early this month, it was causing a stir long before it hit the screen. Clown sightings began last August in 16 states around the US. The clown-obsessed craze resulted in a dozen arrests and several bans on clown costumes. McDonald’s even put the brakes on advertising Ronald McDonald, its famed clown mascot, until the hysteria subsided. Last Halloween, stores ran out of clown costumes and professional clowns were complaining that their reputation was being tarnished by people dressing up in clown costumes and scaring people.

To make things more confusing, the sightings were occurring around the same time the movie wrapped. And the clown chaos also took place the same month Stephen King released his It novel, 30 years prior.

Were the film’s producers behind the frenzy, using the sightings as a clever marketing strategy? The jury is out on whether or not the studio was behind the hysteria, but either way, it worked in their favor.

The producers emphatically say they were not involved. But, they do take accountability for the creepy red balloon sightings around Sydney, days before the film’s release. 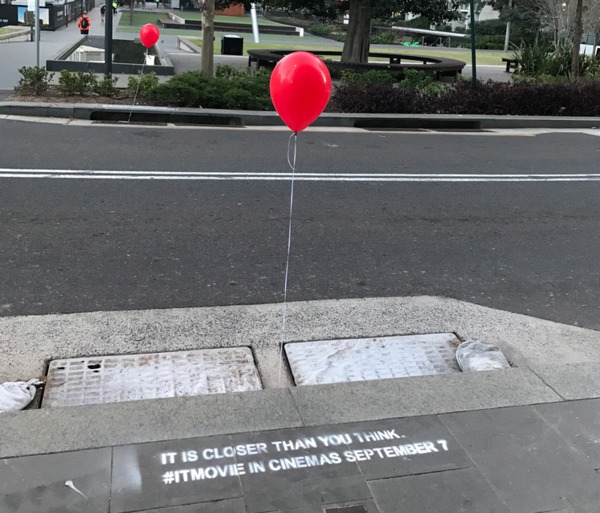 Mr. Glasses Agency and Showtime Marketing won a pitch to promote It in Australia. They fixed red balloons to storm water drains and gutters and added messages on nearby pavement to promote the movie.

IT IS CLOSER THAN YOU THINK.

What does the red balloon signify? Pennywise’s character appears in several of King’s novels and he feeds on children every 27 years. The character’s calling cards are red balloons and they are prominently displayed throughout the movie.

Whether or not the sightings were a marketing ploy masterminded by the movie’s producers, the buzz has been building for more than a year. And the movie’s unprecedented earnings after a slow summer box office month was a testament to the positive effect the buzz had on the campaign.

Alamo Drafthouse in Brooklyn also likely spurred on a few new cases of coulrophobia by asking all of its patrons to come dressed as the movie’s villain, Pennywise, the killer-clown—as if one heart-attack-inducing clown appearance wasn’t enough.

Content marketing takeaway: While you may not have a fright-inducing movie to promote, take a nod from the buzz created by the clown frenzy. If you have an event, product launch or monumental event coming up, start preparing for its release months in advance. Use clever and creative messaging to prime your audience and give away some freebies during pre-launch to get them excited. When launch time arrives, if your product lives up to its expectations, you will notice a surge in interest and an increase in sales.

Content is at the forefront of any marketing campaign and your content marketing campaigns must be executed correctly to generate this type of buzz and expectation. Even if you do not have an upcoming product launch or event, your content will either strengthen your cause or weaken it. If you want to learn how to create a sound content marketing strategy that grows your brand and works in your favor, try us out for free here. We offer a free content analysis, content ideas, one optimized custom piece of content that is yours to keep, and a custom promotion plan. But one thing you should know: If you want red balloons plastered all over your city, you are in the wrong place. We only like orange balloons.