In a nutshell: Blockchain bonds (also known as digital bonds) are like regular bonds, but faster, easier, and more interesting. Instead of buying and selling pieces of paper, they are issued and traded on the blockchain.

There was one image that perfectly captures the three levels of a pandemic: physical, financial, and political. 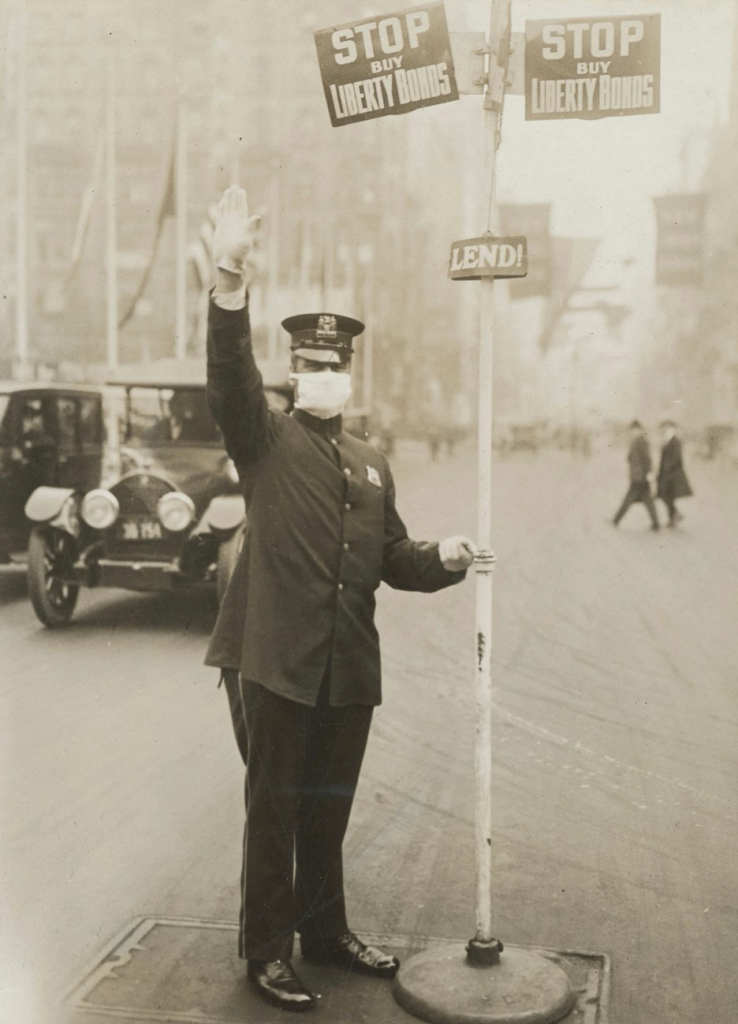 This photo says it all. The policeman with his protective mask and gloves, with a traffic signal commanding the public to BUY LIBERTY BONDS, is a profound statement, and a glimpse into where we are likely headed.

Before we offer the solution, let’s unpack the problem. Like a strand of virus DNA, there’s a lot of information encoded in this single photo.

The Three Levels of a Pandemic

The CoronaCrisis plays out on three levels: physical, financial, and political. 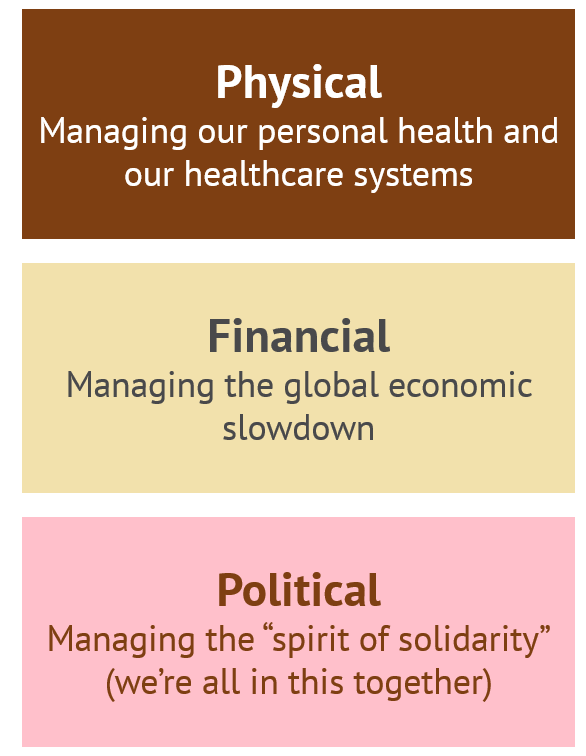 The physical level is easy to understand. That’s our personal safety, home quarantine, our #HealthcareHeroes, testing kits, vaccine development, social distancing, and Clorox wipes. Anything in the so-called “real world” of flesh and bone is physical.

The financial level, on one hand, is also easy to understand: just look at the stock market. On the other hand, the global financial system is impossibly complex (even for economists), so no one knows where it’s going. But the simple way to explain it is:

While some people are still cheerily optimistic that the economy will quickly bounce back (“any day now!”) the ultimate recovery is probably tied to a vaccine, which is likely somewhere between 2021 and 2022. Then we’re out of the woods. 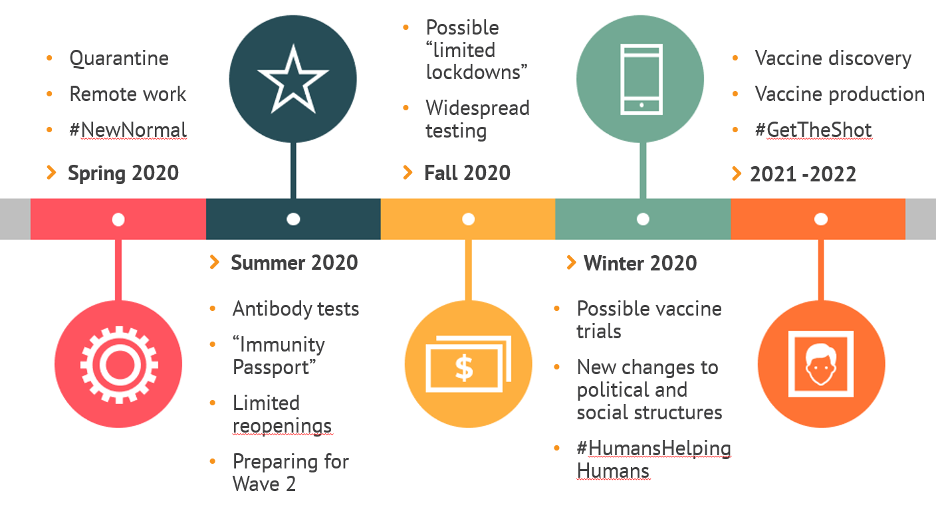 The political level is another dimension. Countries that were slowest to react, and most disorganized in their response, were the hardest hit. Citizens  protested their right to work, prompting some states to reopen prematurely, which simply means the virus infects more people, and the recovery takes longer. (You don’t force a sick patient out of bed and tell him to get back to work.) 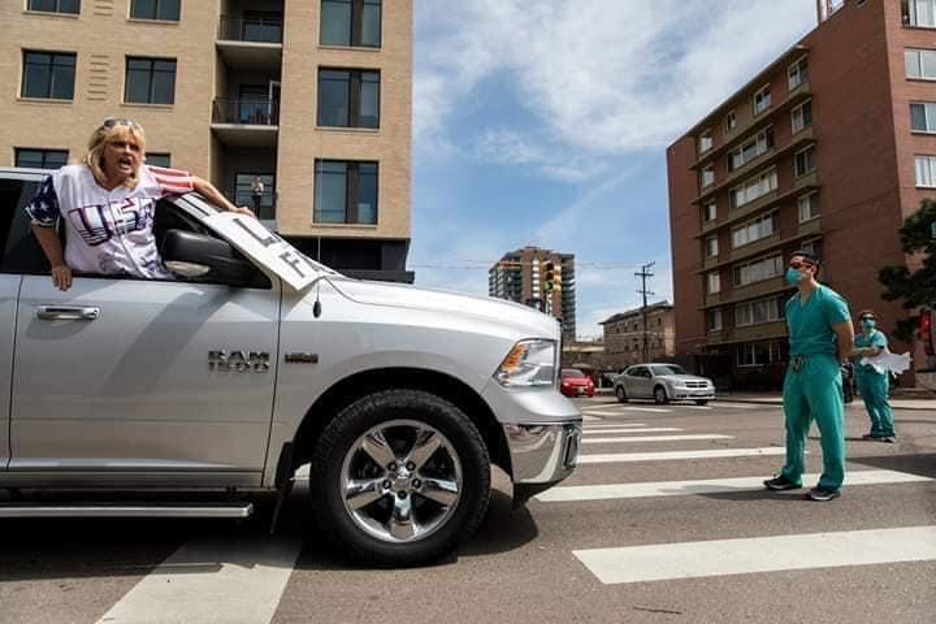 These three levels – physical, financial, and political – are interdependent, which means they don’t cause each other, but rather they are reflections of each other. Like the human species, it’s all interconnected. You can’t “pull apart” the global economy from the global health crisis, because they’re one thing. 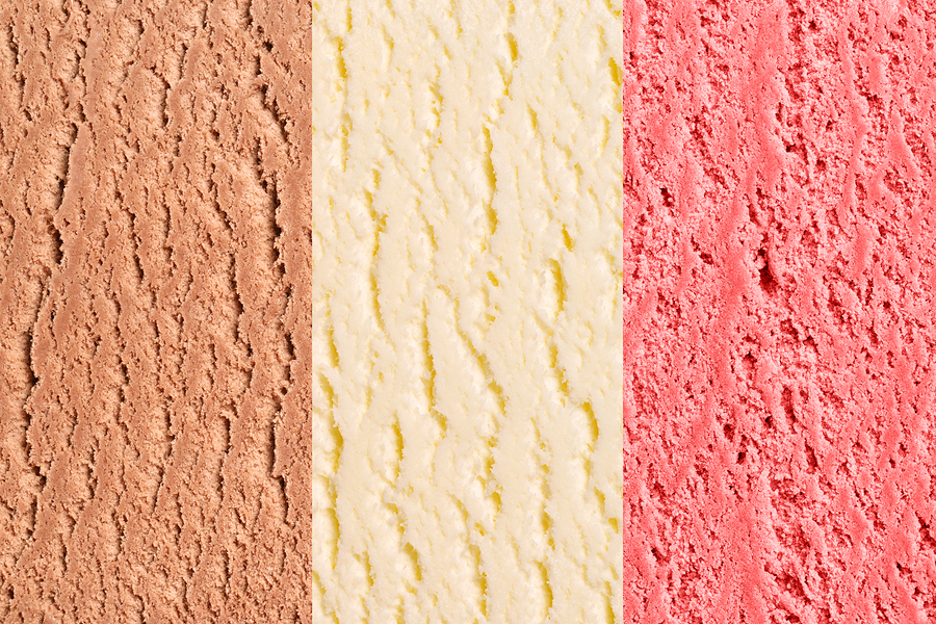 The three layers are all related: 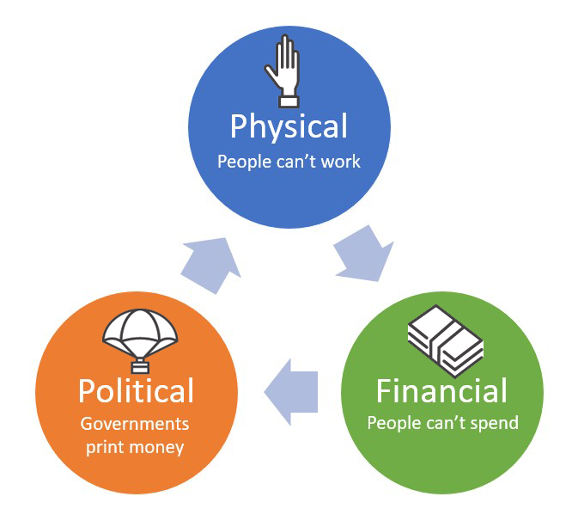 Our goal is a Coronavirus vaccine. Once we all get the #CoronaVaccine, THEN we can begin the #GreatRecovery. So remember our goal:

Then we will have a Planetary Party like no other. But what do we do until then?

In the United States, a strange political drama has unfolded, where the national government has told the states to essentially figure out their own response to COVID-19.

Need more ventilators? Figure it out yourselves.

Need more masks or PPE? Figure it out yourselves.

Need to coordinate quarantines? Figure it out yourselves.

In a nutshell: states make most of their money from income tax and sales tax. When people aren’t working and aren’t spending, the states — like all of us — have a cash flow problem.

This is why state governors have been asking repeatedly for federal help, such as Andrew Cuomo telling the U.S. government, “You can’t pass the buck without passing the buck.”

In plain English, states need money to pay for things like police officers and teachers. When they don’t have enough cash on hand — because states, too, are out of work — they turn to the federal government. 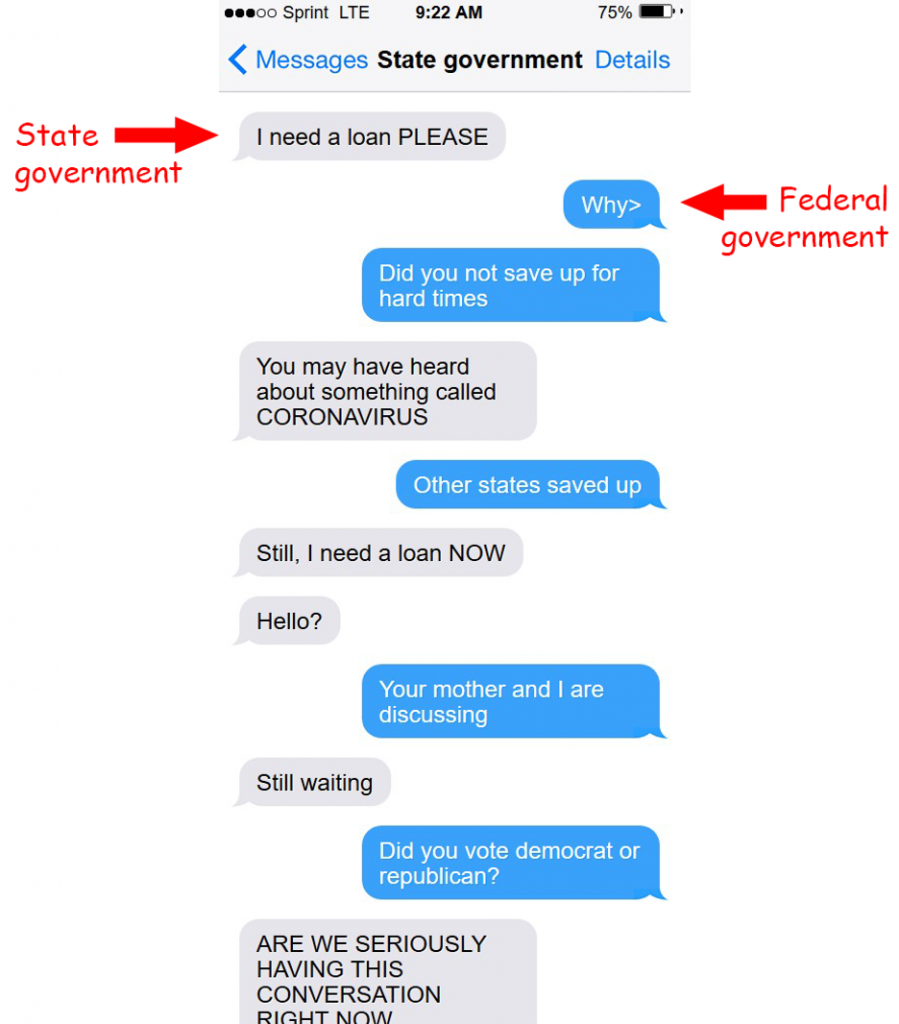 To recap, here’s how state funding plays out on the three levels:

We can do better than this.

Now, for the twist:

If you’ve seen the funny Netflix cooking show Nailed It!, the judges have a “money gun” where they fire cash onto the winner at the end of the show. Essentially, this is what the federal government is doing.

The problem is, a “money gun” is not exactly a financial plan. The states — like all of us — need a better solution than waiting for the federal government to rescue them.

As this recession wears on, the states — like all of us — will eventually be forced with a decision. Do we default on our debts, or do we reinvent ourselves and find new ways of making money?

Fortunately, this is not the first time we’ve faced this problem.

During World War I, the United States was faced with the great challenge of how to pay for the escalating costs of the war. They created the Liberty Bond, which transformed the way “money was done.”

In a Liberty Bond, citizens loaned money to the government to finance the war. (This was before the days of a $750 billion national defense budget.) There were a few flavors of Liberty Bonds:

These were heavily promoted via a massive communication campaign enforcing the idea that buying war bonds was every citizen’s patriotic duty. And the repeated messaging worked, raising $17 billion for the war effort. Every citizen, on average, bought $170 of bonds (about $3,500 today). 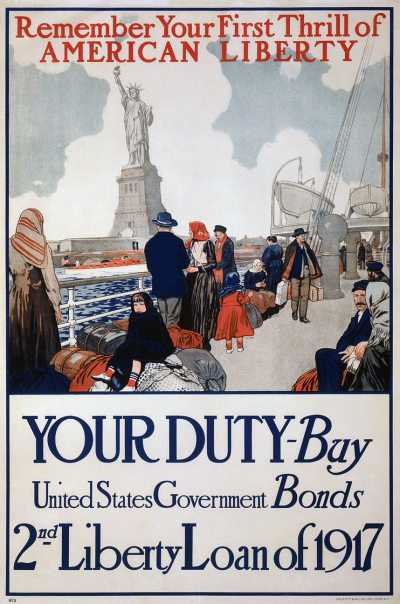 It’s a good idea to use the Statue of Liberty as your spokeswoman (she works for free).

Liberty Bonds also transformed personal finance, because it was the first time most citizens invested in something new and weird. This innovation would last one hundred years, with governments regularly issuing bonds to raise money for new projects. “New and weird” eventually became “old and boring.”

Eventually this innovation would even reach down to the state level: municipal bonds were issued to raise money for, say, a new school or subway line. Citizens bought bonds (lent money) to the state government, who would pay them back interest over time, and eventually repay the bond in full. 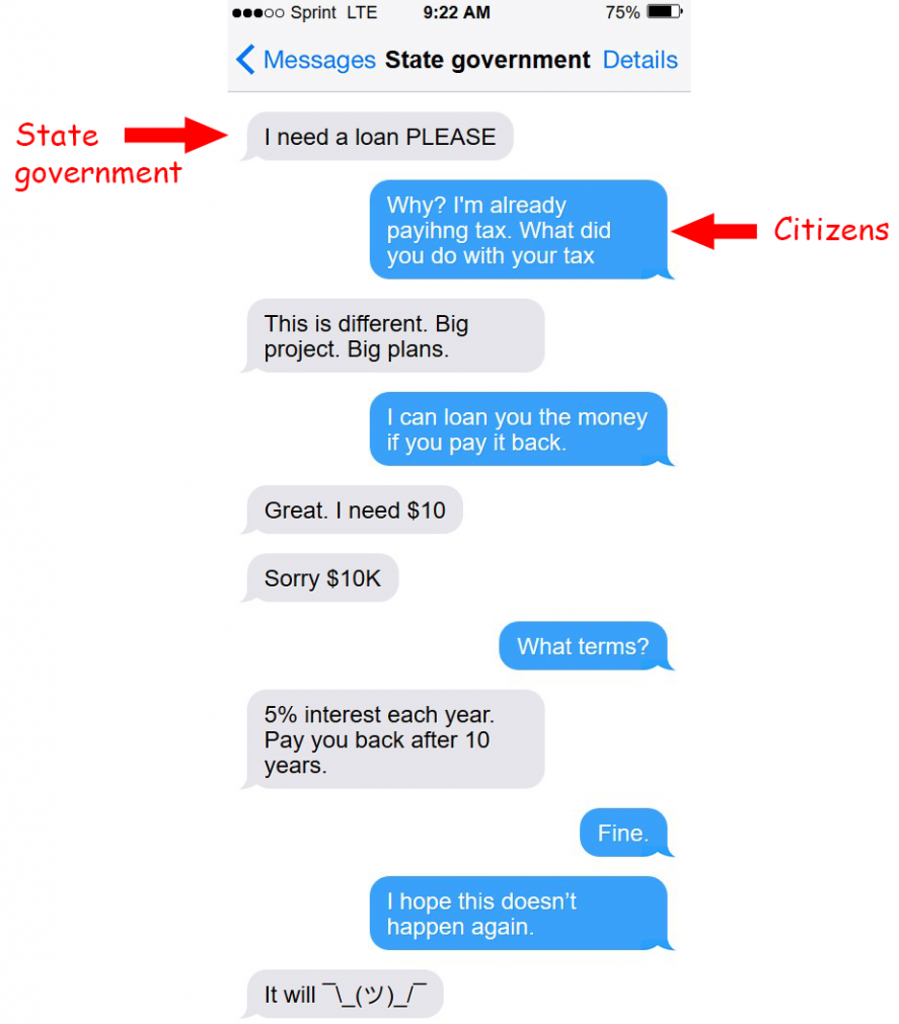 Municipal bonds are actually quite safe: they pay you back 99.9% of the time. Also, they’re commonly called “munis,” which is just too cute. 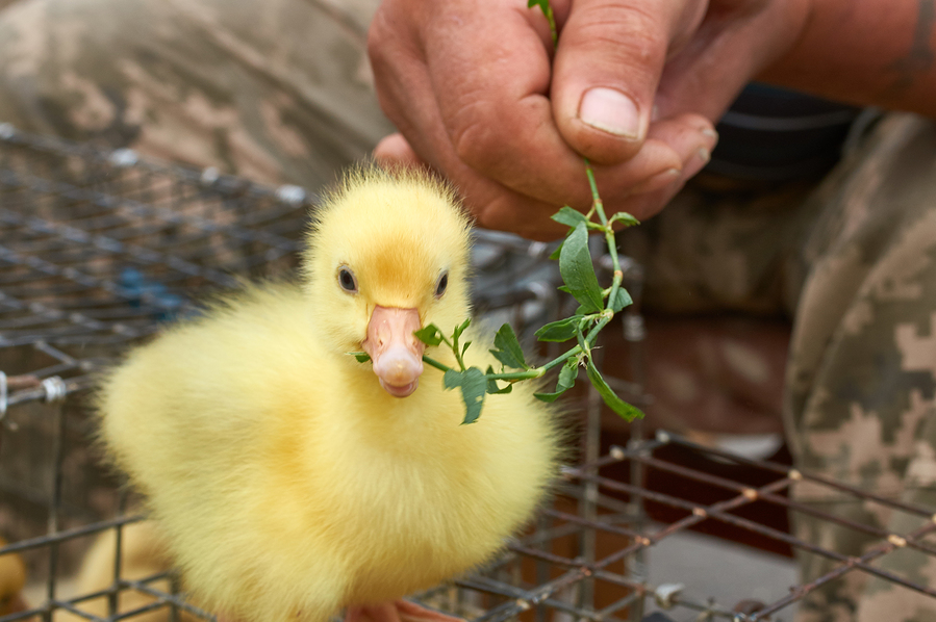 “Isn’t he adorable? I named him Muni.”

In the time of Coronavirus, municipal bonds will be a way for states to raise money directly from the public (rather than waiting for the “money gun” from the federal government). But how do states issue municipal bonds, when their citizens don’t have money to spend?

Simply put, a blockchain bond is just like a traditional bond, but issued and traded on the blockchain. This has a number of huge benefits, which we’ll discuss below. First, let’s unpack how they work, for those new to blockchain.

In 2017, the “Initial Coin Offering” was all the rage. The ICO allowed any investor to easily “buy into” a new blockchain project, being paid in “tokens” (like shares) that could be traded on the digital asset markets (like Binance or Coinbase). 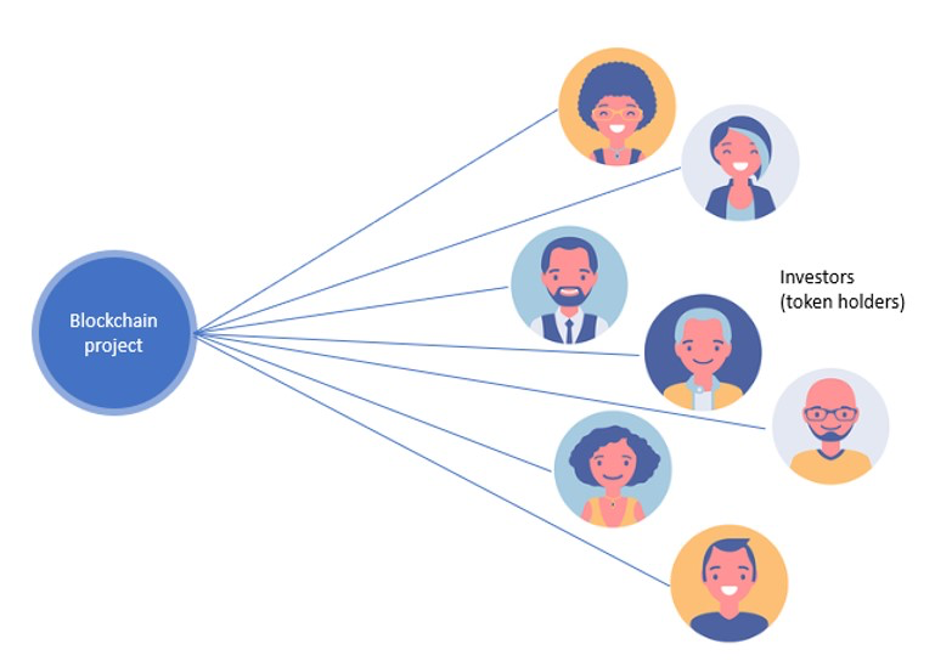 Let’s say you had an idea for a blockchain-based dating app called BlockDate. Using blockchain, you could quickly issue tokens called BlockCoin (like issuing shares of stock), sell them on the open market (like an Initial Public Offering), convert your tokens back to dollars (like cashing out), and use it to hire your BlockDate team.

Investors pumped billions of dollars into these blockchain projects, buying blockchain-based “tokens” that they hoped would go up in value (like the stock market). This gave new blockchain projects a ready source of funding, which they could use to build their business. People became blockchain billionaires.

To be clear, these weren’t stocks (you didn’t own a company) and they weren’t bonds (you weren’t promised repayment). But in this day and age, neither are stocks and bonds (i.e., companies can go bankrupt and bond owners can default on payment).

Turns out the government didn’t like people printing their own money. So the party eventually ended — but the model worked. So let’s keep a strong mental model of this Initial Blockchain Offering:

If there’s one proven use case for blockchain technology, this is it. This is the thing that works.

Which brings us back to the photo of the policeman (political) with the mask and gloves (physical) holding the traffic sign that says BUY LIBERTY BONDS (financial). 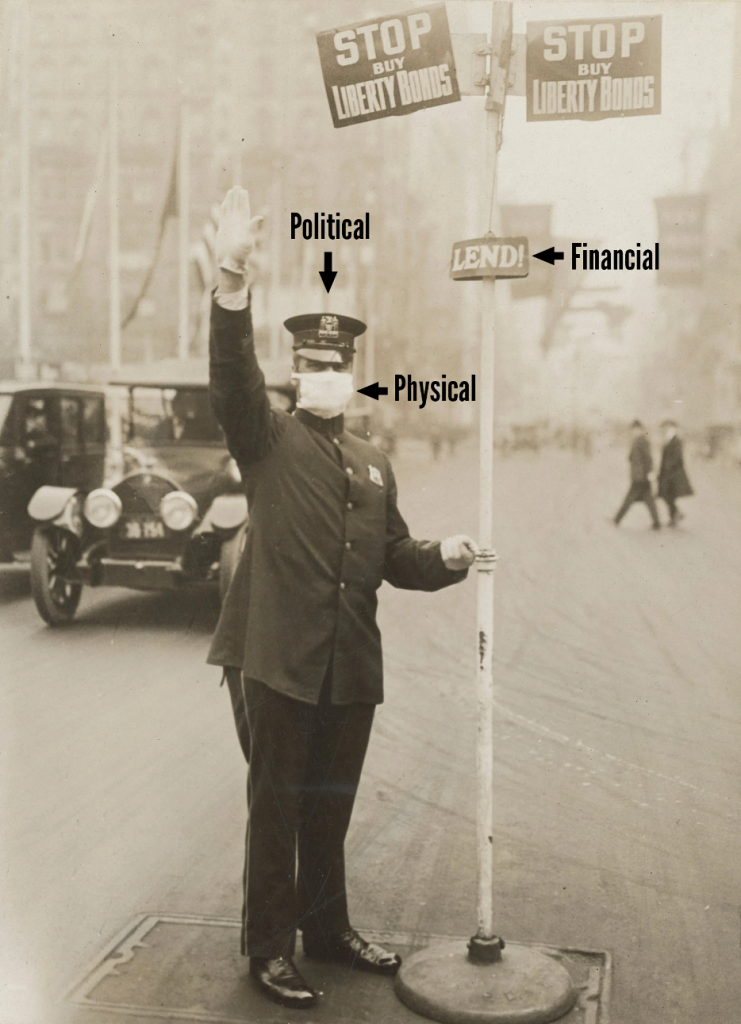 Today, this blockchain-based fundraising model is being used to finance blockchain bonds.

Why are blockchain bonds better?

Blockchain bonds are more efficient. The typical bond issuing process looks like this: 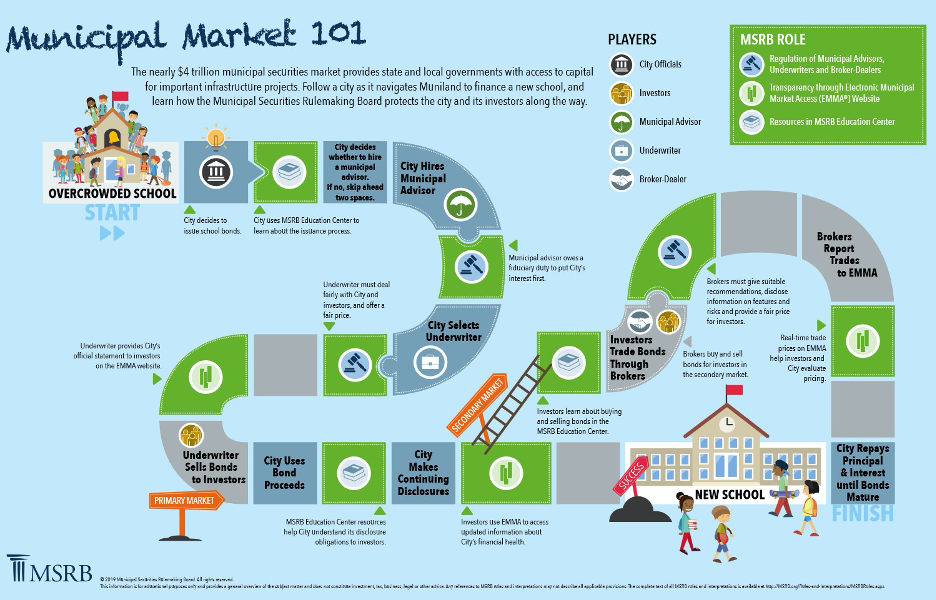 If that looks incredibly complicated, it is. So let’s simplify:

Especially where bonds move into this secondary market, it’s far simpler to just let investors buy and sell their blockchain-based “bond tokens” directly (like we buy and sell bitcoin and other digital assets).

Blockchain bonds are more transparent. All the information about the bond is stored on the blockchain, bringing transparency to an otherwise dark and closed system.

This also improves bond ratings, which have been criticized for being (at best) their own dark and closed system, or (at worst) a “pay to play” system where issuers can ratings agencies to buy better ratings. You may remember the great Steve Carell in this scene from The Big Short:

With blockchain bonds, investors can see the information themselves (though they may still need experts to help them make sense of it).

Blockchain bonds are more trusted. Let’s face it: Bonds are boring. In fact, bonds are the go-to “safety asset” that investors choose when they don’t want excitement. But in a time of Coronavirus, the opposite will likely happen: investors will flee junk bonds, which causes the whole Jenga tower to collapse. Ryan Gosling and Anthony Bourdain explain:

The default on junk bonds, in other words, will likely cause a “domino effect” that will ripple throughout the bond market, then take down the entire world economy.

If and when the “Jenga tower” collapses, it will be hard to restore public confidence in the safety of bonds. Blockchain bonds – a technology built on trust – will work to restore this confidence.

Blockchain bonds are more interesting. Here’s the deal: blockchain is cool. Those of us who have bought bitcoin, or some other digital asset, know how fun it is to watch the ticker every day. Blockchain bonds provide some of that real-time dopamine thrill, but with more safety and less volatility.

Think of blockchain bonds like a kinder and gentler roller coaster.

To summarize: as the federal government fires its “money gun,” states will create blockchain bonds to directly petition the people for more revenue. This will get more money flowing more quickly to the states, improve the bond process, and invigorate the public will to support their local economies.

The final piece of the puzzle will be educating and encouraging the public to buy these bonds. Which brings us back to Liberty Bonds.

The first Liberty Bond issue was unsuccessful. First, “please give your government more money” is a hard sell, especially in times of crisis. And bonds were weird, just like blockchain bonds are today. No one knew how they worked. For most Americans, the whole thing didn’t make sense.

It wasn’t until the U.S. government got their propaganda machine churning out millions of posters, window stickers, and buttons that the public really got on board. They enlisted celebrities to headline bond rallies, like the great movie star Douglas Fairbanks speaking at the Treasury building: 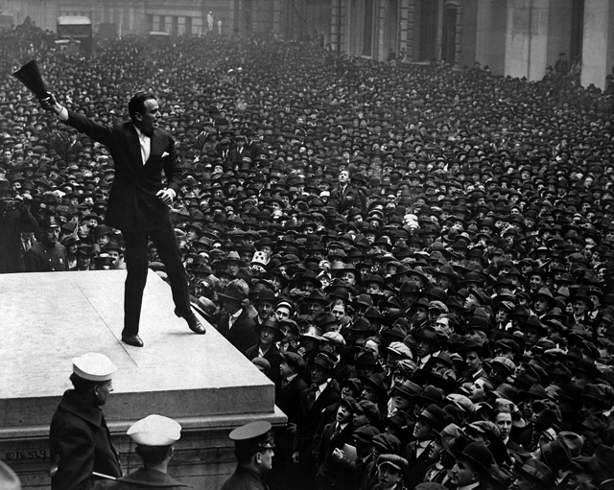 This glimpse into the past is likely a glimpse into the future. As governments try to work their way out of the CoronaCrisis, they will likely turn to their citizens for help. Citizens will not be an easy sell, unless blockchain bonds are communicated widely and well.

Just replace “Liberty Bonds” with “Digital Bonds” and you’ve got a winner.

TL;DR (Too Long; Didn’t Read): Blockchain bonds (a technology of trust), combined with a massive media campaign (Coronavirus Communications), are likely to turn the tide in the CoronaCrisis. States will raise the money, citizens will invest in the future, and blockchain will boom. This keeps us alive until we get to the vaccine.

That’s how we get to the #GreatRecovery.

Fill out the info below to download our new ebook, Blockchain Bonds: How They Work and Why We Need Them.

Thanks for downloading! We hope you’ll share it with a friend.
P.S.: Contact us if you can help issue or offer blockchain bonds during this time. (We’re building the network.)