Media Shower writer Jane Gregory is well-known for her work in travel, marketing, and education. You can follow her on Twitter.

“Welcome to my house. Come freely. Go safely; and leave something of the happiness you bring.”

So said Count Dracula, in Bram Stoker’s classic novel of 1897. But it could just as easily be said today by anyone making a living on the internet. A writer’s “house” is our work; we invite people to read it, and hope that it will be interesting enough to stick in as many minds as possible for a long time. For those who have a service or product to sell online, their “house” must be their website or blog. People can come to it freely, and hopefully they’ll be impressed enough to leave a little of their happiness, otherwise known as hard-earned cash. If your mind is currently conjuring a blood-sucking analogy, however, please think again! There’s plenty we can learn from Stoker’s novel that is just as relevant today when it comes to writing for the web. When we think of vampires in literature, Count Dracula is the ultimate archetype. Yet he was far from the first vampire about whom stories were being told. There is evidence that even the Ancient Egyptians were circulating folk tales of blood-sucking demons. According to the British Library, the first appearance of the vampire in English Literature occurs in Robert Southey’s poem Thalaba the Destroyer. Published in 1801, it precedes Dracula by almost a century. Yet Stoker managed to offer a fresh take on the theme that appealed to public consciousness in an unprecedented way. It’s much the same today. A great deal of web content is formulaic and repetitive. The pieces that stand out are those which offer a fresh perspective on a subject, no matter how frequently it has been discussed before.

Many of the early literary vampires crumbled to dust in public memory due to the throwaway format in which they were written and published. Who now, for example, remembers Varney the Vampire, the titular anti-hero of James Malcolm Rymer’s novel published in 1854? This, like most of the other vampire stories of the time, was sold as a “penny blood.” Cheap, easy-to-read novellas stuffed with as much horror and melodrama as Victorian sensibilities could handle, they were designed to be disposable. Bram Stoker, by contrast, eschewed this trend, writing a carefully crafted novel aimed at a more articulate audience. Due to his creation of quality content, his novel was destined to become a classic, still remaining in public consciousness today.

See All Sides of the Story

Dracula  is told from the points of view of five different characters, through letters and journal entries, enabling us to see the whole story from various different angles. This is an important concept to bear in mind when writing web content. The more points of view we are able to see, the wider the audience our writing is likely to appeal to. It reminds us to write in a way that will resonate with as large and diverse an audience as possible. 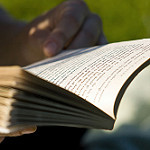 Writing for the web is all about persuasion. Whether we want our audience to buy a product or service, or become sympathetic to a cause, our purpose as writers is to open the minds of our readers to possibility. Stoker involves the reader so completely in his gripping narrative that at the end, when Dracula is killed, we are supportive of his killers. He achieves this subtly; at no point does he attempt to instruct the reader what to think, he simply tells an engrossing tale and leaves us to make up our own minds. There are clues in the text, such as “At least God’s mercy is better than that of these monsters.” Stoker is essentially “selling” moral values to his Victorian audience, but the same technique is just as relevant in writing to sell any ideology or even consumer product today.

So there you have it. A book about vampires might not seem like the perfect marketing tool (although Twilight may beg to differ) but Dracula actually has a lot to teach about content marketing. Click here to learn more about Media Shower’s content marketing success stories.