One image from this article has seared itself onto my brain. 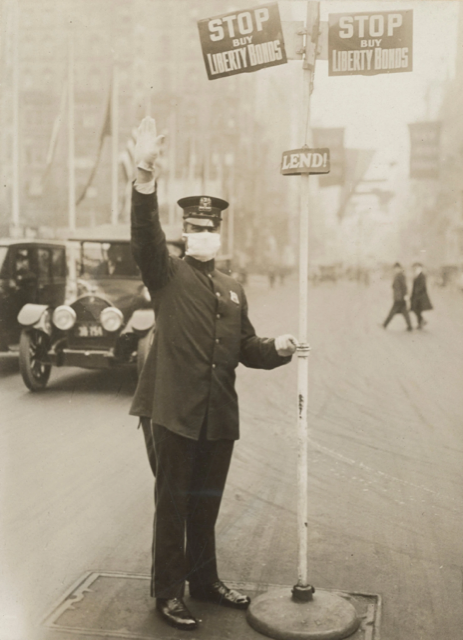 This photo says it all. You have the physical, financial, and political dimensions of the pandemic in one arresting image.

The policeman with his protective mask and gloves, with a traffic signal commanding the public to BUY LIBERTY BONDS, is a profound statement, and a glimpse into where we are likely headed.

Before I offer the solution, let me unpack the problem. Like a strand of viral DNA, there’s a lot of information encoded in this single photo.

The Three Levels of a Pandemic

We’re seeing the CoronaCrisis play out on three levels: physical, financial, and political. Let’s visualize this like the three layers of neapolitan ice cream. 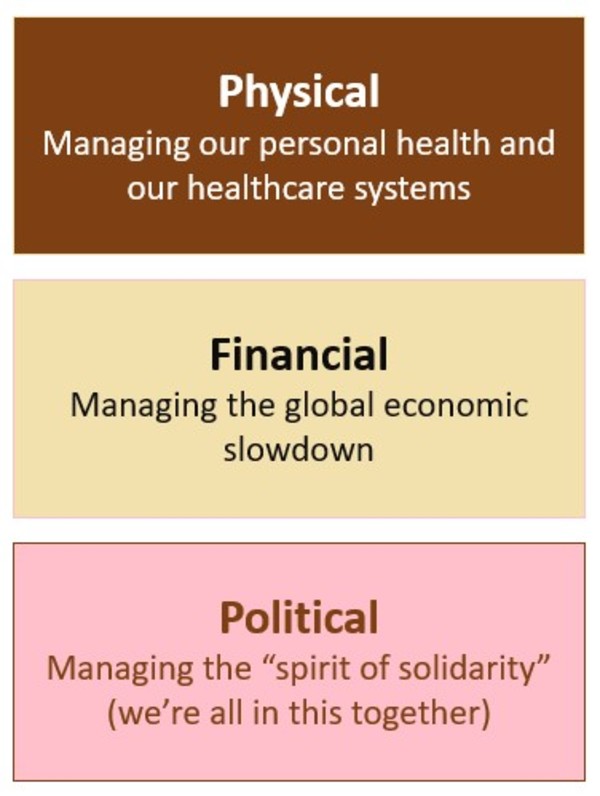 In the United States and elsewhere, people are confusing these three levels, so let’s be clear about how each one works.

The physical level is easy to understand. That’s our personal safety, home quarantine, our #HealthcareHeroes, testing kits, vaccine development, social distancing, and Clorox wipes. (You’re soaking in it.) Anything in the so-called “real world” of flesh and bone is physical.

The financial level is also easy to understand: just look at the stock market.

The global financial system is impossibly complex, even for economists, so no one knows where we’re headed. But the simple way to explain what’s happening is:

While some people are still cheerily optimistic that the economy will quickly bounce back (“any day now!”) the ultimate recovery is probably tied to a vaccine, which is likely somewhere between 2021 and 2024. 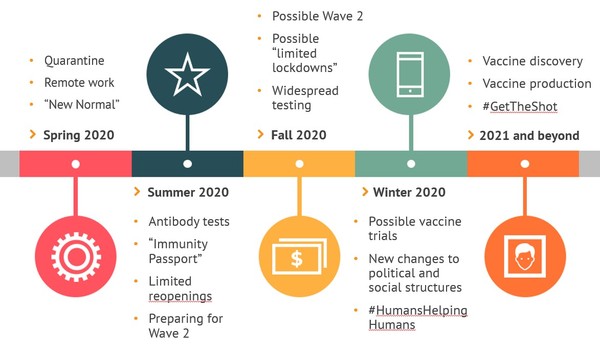 The political level is another dimension. In the United States, we’ve been slow to react, so we’ve been the hardest hit. Last week citizens began to protest their right to work, prompting some states to reopen prematurely, which simply means the virus will infect more people, and the recovery will be longer.

In this powerful image captured by photojournalist Alyson McClaran, you can see a confusion of the physical, financial, and political aspects. “Liberty” (a political value) and “getting back to work” (a financial value) is at odds with “healthcare” (a physical value). 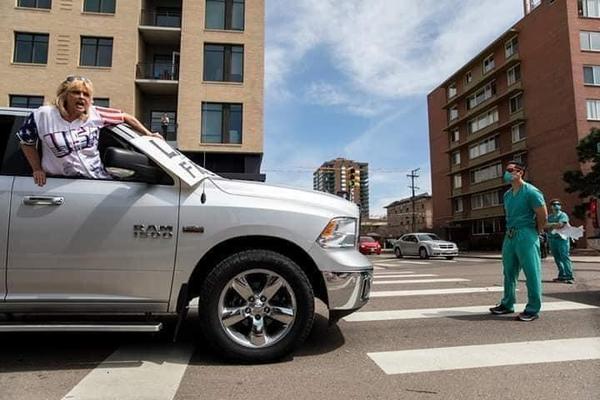 These three layers — physical, financial, and political — are interdependent, which means they don’t cause each other, but rather they are reflections of each other. Like the human species, it’s all interconnected. You can’t “pull apart” the global economy from the global health crisis, because they’re one thing.

In the United States, a strange political drama has unfolded, where the national government has told the states to essentially figure out their own response to COVID-19.

Need more ventilators? Figure it out yourselves.

Need more masks or PPE? Figure it out yourselves.

Need to coordinate the quarantine timelines? Figure it out yourselves.

While much decision-making should be delegated to states, it’s just common sense that if Georgia opens back up, people from other states are going to drive to Georgia. They’re going to get a haircut and a tattoo, then bring COVID-19 back to their home state, where it further infects their own state.

Put another way, you don’t kick a sick patient out of bed and tell him to get back to work. “Really, I feel fine!” he croaks, while he sneezes all over the office phones and infects his co-workers.

Once again: it’s all connected. We are one human host. That’s how the virus thinks. It’s how we have to think, too.

Let’s see how this strategy of “figure it out yourselves” plays out on the three levels:

I think we can do better than this.

Blockchain to the Rescue

Perhaps you remember the ICO craze of 2017. 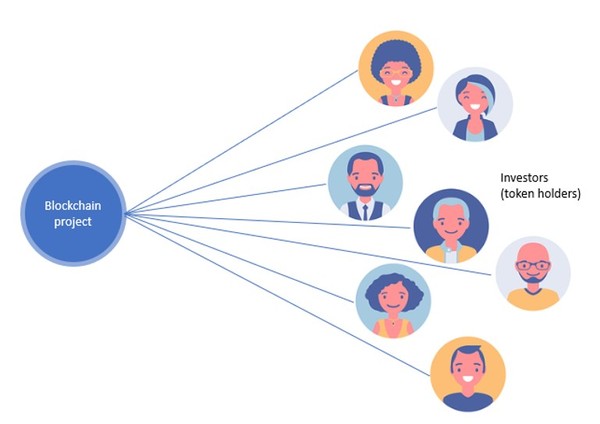 In an Initial Coin Offering, investors bought blockchain-based “tokens” that they hoped would go up in value (like the stock market). This gave new blockchain projects a ready source of funding, which they could use to build their business (like the bond market).

To be clear, these weren’t stocks (you didn’t own a company) and they weren’t bonds (you weren’t promised repayment). But, of course, neither are stocks and bonds (companies can go bankrupt and bond owners can default on payment).

Let’s just keep the model of an Initial Blockchain Offering in mind:

If there’s one proven use case for blockchain, this is it. This model is what has built the $200 billion digital asset market.

Which brings us back to the photo of the policeman (political) with the mask and gloves (physical) holding the traffic sign that says BUY LIBERTY BONDS (financial).

Blockchain to the Rescue

In next Friday’s column, I’ll explain how blockchain-based token offerings can be used to create a kind of modern-day Liberty Bond. This is the Big Idea that will save states from bankruptcy, get us through the CoronaCrisis, and aid in the #GreatRecovery.