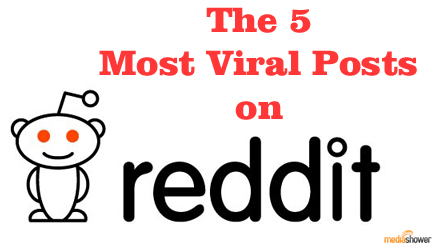 As the self-appointed “front page of the Internet,” when it comes to making something go viral, a retweet from Justin Bieber himself couldn’t do more for your page views than five minutes above the fold on Reddit. With that in mind, we decided to take a look at the most viral posts in Reddit history; ya know, to see if we could learn how to tame this wild beast. There are five things and five things only that have been more popular than an opportunity to ask President Barack Obama anything, all of which give a unique look into the culture of Reddit and what gets its readers ready to upvote. Just to be clear, a chance to ask the President ANYTHING was number 6. We’re a little disappointed that he couldn’t at least find the same tie. Come on, dude.

The first thing Reddit liked more than a chance to ask the President if he ever sends his secret service guys out for pizza at 3AM was a prank in which a presumably very bored Facebook user decided to find everyone on the site that shared his name. Once he’d found them he’d “seed them a friend request” (spelling mistake his) while copying the exact pose they had made in their profile picture. It’s funny, we guess; not guy-being-hit-in-the-groin funny, but certainly chuckle-worthy. At the very least it’s funny enough to ignore that spelling error. Almost.

If you’re curious about the difference in views between numbers four and five, well that’s because Reddit has a thumbs up system. More thumbs up or “upvotes” means a more popular post. This particular post contained a link to the video above; a newscaster reporting about about the local Meals on Wheels program—or more specifically, how much it sucked. Though the reason it appears to have been upvoted is purely because the reporter has eyes you could get lost in for an eternity. Also, he eats cat food. Apparently if you search for Adam West in the phonebook, it leads you on an endless chase around the ancient tome, telling you to instead search for Bruce Wayne, Batman and then finally, Adam West again. Meaning you never actually find his number, so your dreams of calling Mr West stay as dead as the pulverised, tear-soaked tree you’re currently cradling in your arms. Sadly, the total views for this image are incalculable since it travelled around the Internet so fast it broke through reality and slapped the Flash. Hail passenger in this case.

“The Bus Knight” is the impromptu nickname given to an unknown Brisbane resident who, using logic and cojones the size of Mexico, talked a violent stranger into stepping off of a bus. The tale, as recounted  by Angus Robertson, quickly became the second most-rated link in Reddit history, being shared and viewed millions of times. For some reason though, Angus’ witty YouTube clip in which he thanks everyone for sharing the video, only has 839 views at the time of this writing. It hardly seems right. Maybe the top-rated link on Reddit will restore some hope in how this site works. When user ggh2 made a test post to see if their account worked properly, little did they know they were stumbling right into internet fame. Yes, oddly, the most popular link in Reddit history is literally nothing more than a request for the post itself be ignored. That’s a statement so dense with stupidity it bends light.

But hey, now we know the secret to making Reddit love our links, they either have to be a funny picture, made by the President, or specifically ask people not to share them. With that in mind, please don’t share this article, or this Photoshopped picture of President Obama as an eagle.