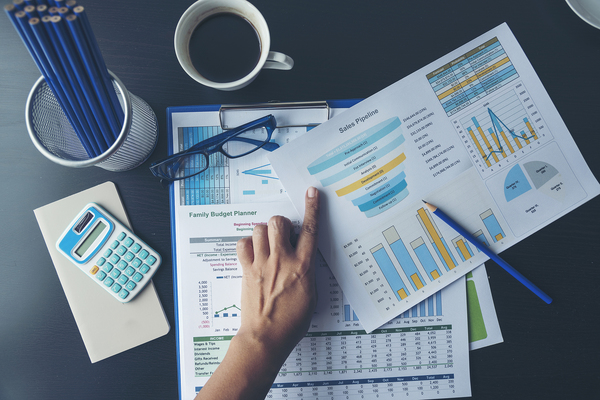 “If you build it they will come.”

Most businesses consider getting their site actually built and populated with content to be the lion’s share of the work.

And once that’s done they understandably feel they’ve earned the right to kick back and reap some rewards.

Unfortunately, a website that simply exists—even a popular one—will only ever be a fraction as profitable as it might be compared to one whose owners regularly run it through site-analysis software such as Google Analytics and Media Shower.

However, as anyone who has used any sort of analytics software can tell you, the challenge then becomes separating the signal from the noise.

Here’s an example of stats provided by Google Analytics for just a few pages on a single site: 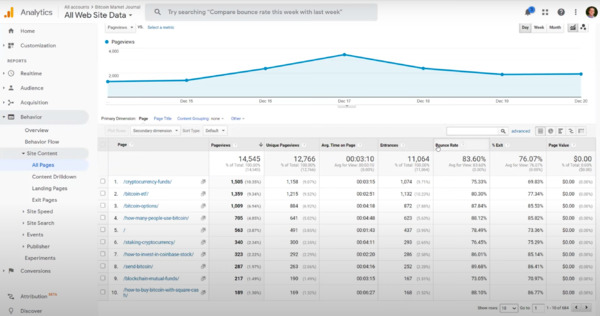 That’s a lot of information to drill down to (notice the left column) and wade through.

Fortunately, we can ignore much of what’s on this page and narrow our focus to just the two columns that matter most:

We know these are two of the most important rankings to Google because they’ve been a part of the analytics process since version one. Had something better been developed they would have replaced them long ago.

The Lifecycle of Analytics Data

Before we talk about the hows and whys of these content marketing statistics, though, let’s briefly go over how users get to your site for future analysis.

85% of all of your blog traffic will come from a search.

This means playing nice with search engines is paramount. (We’re focusing on Google for the purposes of this article as they have the lion’s share of the search market. However, the points covered here apply to all search engines.)

If your site isn’t appearing on the first page of a Search Results Page (SERP) your chances of success—and profit—drop considerably.

So if, say, a user searches for “how to buy bitcoin via PayPal”

Users will get a page like this, select a link (hopefully yours), click on it, and off they go.

At that point, you’ve got about 10-15 seconds to hook that reader and demonstrate your page is a good match for their question.

And that’s when the analysis begins in earnest.

If users feel after the first few seconds that your article isn’t what they need, they won’t stick around to give you more time to change their mind. They’ll “bounce.”

Bounce rate = percentage of users who read one page or less and hit the back button.

If this happens a lot, Google will move that page off of the first page of their SERP. And statistics show that non-first-page-ranked sites do a fraction of the business as those on the first page.

If it happens to most of your pages, Google will move your whole site to the murky depths of the bottom-page links (The dreaded Goooooooooogle.)

But let’s say your content is what the user is looking for and they keep reading past the first few paragraphs.

If you’ve written an article that does a bang-up job of answering the user’s question, Google will take note of the fact that they stayed on your site and reward that page with a higher ranking.

If the bulk of your pages are similarly scoring high in the time on page department, your entire site rises in the rankings.

Too many creators think getting tens of thousands of page views should be their focus because that’s what advertisers look for, but if your users simply view a page for a few seconds and leave Google will bury your site, and then your advertisers will drop you.

You might know enough tricks to keep that from happening for a while, but then you’ve put yourself in the position of trying to outsmart a multi-billion dollar corporation with hundreds of very clever software engineers who are determined to not be outsmarted.

Which, honestly, seems like an awful lot of work.

How to Break it Down

To make things simple, here’s a table that lays out the four ways a page will play out in a Google Analytics report.

Good content is the foundation and capstone of a web site’s success.

FIRST: Do your homework. You have to know what you’re writing about.

SECOND: Write an attention-grabbing introduction. The Internet has whittled everyone’s attention span down to a nubbin.

FIFTH: Include big, beautiful photos. Study after study shows that articles with two or three photos rank higher than ones without.

SIXTH: Favor—don’t force—the keywords. The days of stuffing and shoving keywords into every nook and cranny of an article are long-gone. In fact, one or two instances are generally plenty.

Where Google Analitycs Comes Up Short

Bounce rate and time on page, while undeniably invaluable, are only two sides of the analytics triangle.

Ideally, every article on your site has some sort of CTA or “call to action” which keeps the user on your site longer, helps establish and/or cement authority, and moves them further along the sales funnel.

Examples of CTAs include links users can click on to sign up for newsletters, be added to an email list, or even just read another article on your site.

Google Analytics, for all its near-omniscience, can’t track how often your users are actually doing the thing you want them to do. (Unless you set up Conversions, which is so complicated and time-consuming that few people understand it.)

But Media Shower can.

Here is an example of Media Shower stats for some similar pages seen in the Google Analytics report.

At a glance, it shows you which pages are most effective, while also pointing out the ones that are underperforming and in which area(s).

It also gives you an overall score that helps you determine how well the page is doing relative to the rest of the content on your site.

PRO TIP: About once a quarter—after you’ve updated all of your content to High time/Low bounce status—you’ll want to run at least your top 20-30 pages through Google Analytics to keep an eye on what’s still working and what might need to be touched up.

There’s a limit to how effective any site or page can be. We’re betting, though, there’s room for improvement—and greater success—on the sites you’ve already built or are building.

But without good, detailed information you won’t know where that room for improvement is.

As H. James Harrington once wrote:

“Measurement is the first step that leads to control and eventually to improvement.

If you can’t measure something, you can’t understand it.

If you can’t understand it, you can’t control it.